The Beatles Please Please Me Review

The beginning of a career that would effectively define pop itself.

While neither their best-selling nor most critically celebrated long-player (take your pick from Revolver, Abbey Road, the white album...), Please Please Me marks a vital moment in the career of The Beatles. Their debut album set in motion the wheels that would carry them to the very peak of public recognition, and subsequently into realms of sonic experimentation that would create a template for so much rock and pop music since.

Producer George Martin was, in Paul McCartney’s words, unsure of the band’s musical abilities when he invited them to Abbey Road to record songs they’d spent months perfecting live. In that environment they regularly shined, but studio experiences were still comparatively alien. What Martin recognised was a focus, a desire for more than their present lot. He listened beyond the music of the moment, hearing a future that these four young men would shape for themselves. The self-contained pop group was born, and quicker than either band or producer envisioned.

The recording of Please Please Me was fast, the band committing ten of these tracks to tape in just a single day – “a straightforward performance of their stage repertoire,” was how Martin summarised the sessions. Previously released single tracks and b sides completed the set. Featuring more originals than not, Please Please Me saw the McCartney-Lennon songwriting partnership blossom – from the title track to Love Me Do, There’s a Place to I Saw Her Standing There, the collaboration was incredibly productive, and would continue to bear fruit until the group’s Let It Be swan song of 1970.

The immediacy that these songs carry remains irresistible, and Please Please Me’s lengthy reign at the top of the UK albums chart proved the perfect response to Decca’s rebuttal that guitar groups were “on the way out” when the label turned down the opportunity to sign the band. Lennon’s vocal on the climactic Twist and Shout is perhaps the most wonderfully loose, ragged-edged element of the entire record, and the essentially ‘as live’ recording showcases a group with their feet still very much in the clubs and theatres, performance just preceding actual arrangement. Their way with composition is relatively simple; effective, but black and white nonetheless, playing exclusively to recognised strengths.

What followed made The Beatles the inspirational band they’re regarded as today. But the grandest oak begins as the tiniest acorn, and Please Please Me is just that: perfectly formed for what it is, and ready to split when promise is realised. 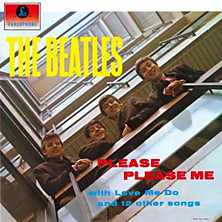