The Claudia Quintet +1 featuring Kurt Elling and Theo Bleckmann What Is the Beautiful? Review

A collaborative jazz/poetry affair that proves to be a piece of vital, living art.

In the 1950s, American poet Kenneth Patchen was a pioneer of poetry with a live jazz accompaniment, performing with Charles Mingus and others. While some falsely aligned him with the Beats, Patchen remained an elusive and idiosyncratic artist up to his death in 1972, producing an eclectic body of work that ranged from political polemics, to surreal and childlike ‘painted poems’, and deeply felt love poetry. To mark his 100th birthday in 2011, the University of Rochester commissioned New York’s Claudia Quintet, led by percussionist John Hollenbeck, to revisit Patchen’s jazz-plus-poetry experiments, by setting some of his poems to new music. The result is the group’s most compelling album to date.

Here, as on 2010’s Royal Toast, the group is expanded to a sextet with the addition of pianist Matt Mitchell – and some arrangements will feel familiar to listeners already hip to Hollenbeck’s mixture of 20th century minimalism, contemporary classical and rockish post-jazz. But, for this latest set, the unit is also augmented by two vocalists with contrasting styles, who take the album into some interesting new territory. Theo Bleckmann, who has previously collaborated with Hollenbeck’s Large Ensemble, interprets a handful of pieces with a soft, wispy singing voice that conveys a mournful quality perfectly suited to the dreamy, rippling ballad, The Snow is Deep on the Ground.

Nonetheless, it’s crooner Kurt Elling who steals the show, inhabiting tracks with a rich, spoken baritone and an actor’s sense of character and timing that bring Patchen’s words vibrantly to life. Moreover, there’s a neat conjunction between Elling’s interest in vocalese and Patchen’s experiments with speech-poetry. On Showtime, for instance, Elling’s louche yet authoritative announcements are closely matched by tightly scored double-bass and vibes shadowing the rhythms of speech, before diving into nippy, slightly old-fashioned swing that, while uncharacteristic of The Claudia Quintet, serves as a welcome tip of the hat to Patchen’s original milieu.

It all comes together on the title-track: an intensely compassionate piece of writing, bursting with apocalyptic love for humanity, and punctuated by the repeated refrain: "Pause. And begin again." Supported by a beautifully understated accompaniment, that lets Elling’s delivery exhale just the right amount of gravitas, it’s genuinely moving – and easily elevates the album to the status of vital, living art. 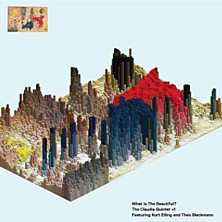