Duo’s debut is a wryly appealing turning point in the art of romanticised retrospection.

In the opening chapter to Jon Savage’s Teenage, he contrasts the lives of two young people who rose to prominence in the late 1800s, and gave rise to the perception of those formative years as a state separate from childhood and adulthood: Russian debutante Marie Bashkirtseff and Massachusetts murderer Jesse Pomeroy. Whilst they were notorious for very different reasons – respectively indulgent memoirs and infanticide – their legends achieved maximum potency due to the hasty ends to their lives. Bashkirtseff died of tuberculosis, Pomeroy was confined to prison for the rest of his days, leaving images of them frozen in time forever.

It’s conjuring similarly precise portraits of this fertile, fervid period that makes London duo Summer Camp’s debut album, Welcome to Condale, such a success. When the pair first came to the fore two years ago, hiding behind old sepia pictures and pretending they were six Swedish teenagers, bloggers aligned them with the chillwave movement. Listening back to early demos, they’re characterised by a sultry, languid drift, songs imploring a paramour never to leave some halcyon moment.

However, the band – eventually unmasked as Jeremy Warmsley and Elizabeth Sankey – fast moved away from ideas of spinning out endless summers into developing their own world of twisted youth, transferring the Swedes idea into the cast that populates these songs. Condale, an accompanying fanzine explains, is an LA town where kids run wild in the mansions of dead movie stars, full of torrid love letters and ambitious, worthy mission statements from the town’s local band (so, not dissimilar to John Hughes’ Shermer). It’s inessential to enjoying the album, but demonstrates their commitment to creating a world that rings true thanks to precision rather than cloudy vagaries.

Most importantly of all, there’s no doubting the intent that blazes through the individual songs on the record. The pair acts out power struggles between characters, dominating and demeaning, breaking up and getting back together with the cavalier flamboyance that fades in adult relationships. On opener Better Off Without You – think a bra-burning Shangri-Las – Elizabeth rails pityingly about the drag of a boy who can’t stop calling, tartly stating "there is no me and you". The following song, Brian Krakow (named after a character from My So Called Life – a little odd in their otherwise original story), sees Jeremy’s character laying down the aloof but alluring conditions on which he’s willing to submit to a girl. The power struggles come to a hilt on highlight Losing My Mind, a series of despondencies and ultimatums spelled out through clever line exchanges: "You you you’re wasting my time / Time time I was moving on / On on on honest to god…"

With Pulp’s Steve Mackey on production, …Condale has a stern bite, all bristling synths and ramped up, classic guitar licks. For some, the idea of the album as a character construction may seem insincere, but its cinematic quality and their ability to conjure the sheer ignominy of youth, as on the gum-snapping, eye-rolling Last American Virgin and dark Nobody Knows You, works marvellously. Like Bashkirtseff and Pomeroy before them, Summer Camp’s debut marks a sincere, wryly appealing turning point in the art of romanticised retrospection. 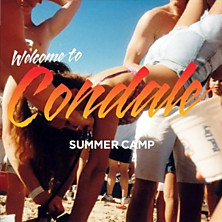