Boy, is this hard to explain! The Hilliard Ensemble vocalising while Christoph Poppen plays Bach's most famous work for solo violin...surely some mistake? Well, no. You see, it's all down to the sharp eye and keen ear of German musicologist Helga Thoene. She specialises in seeing the hidden messages in baroque music that our superficial 21st century approach misses, and her theory is that Bach's D minor Partita for solo violin is full of hidden references to death, riddled with quotations from his own chorales. I've played the piece and never noticed anything like that&but then I wasn't looking, was I?

I won't go into details, it's mind-boggling enough when you read the notes, and that's the best place to direct you if you're interested in finding out more. But how have Helga Thoene's analyses been made flesh by our performers, you're asking? Well, the chorales, performed gently and very beautifully by the Hilliards, alternate with the individual movements of the D minor Partita, allowing us to investigate the associations with our own ears, or at least to luxuriate in an imaginatively mixed recital of Bach at his most affecting.

And so it goes - until we reach the great Chaconne. Thoene's thesis is that this movement represented a memorial to Bach's wife, Maria Barbara, who died while he was away from home. He returned to find not only that she'd died, but she'd actually been buried a week before his return; it's hard to imagine how this must have affected him. So, says the Professor, the Chaconne is a 'tombeau' for Maria Barbara Bach, and here, as Poppen plays one of the greatest movements for violin ever composed, the Hilliards sing the chorale quotations, showing how they fit alongside the solo line. It must have been extremely difficult to make this work in performance, but the result is extraordinary, turning the Chaconne into a memorial, and an expression of faith in the resurrection of the dead and life everlasting.

You may not want to play this every time you think of the D minor Partita, but it's deeply affecting, and beautifully realised' ECM's been intelligent enough to give us a number of possibilities, recording two versions of the Chaconne, with and without voices, so if you want you can programme Christoph Poppen's performance of the Partita with no vocal interventions at all. But I bet you won't want to after you've heard them together. 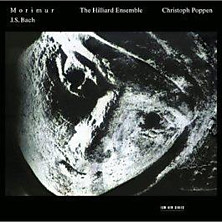