Easy-going and mellifluous, songs built on the simplest of patterns.

Listening to The Low Anthem’s breakthrough album – 2009’s Oh My God, Charlie Darwin – was a jarring experience. It was a clashing of two genres: profoundly moving acoustic folk and raucous blues-rock. The clash was so marked, it sounded like two separate bands. But the album was roundly praised by critics, who claimed that the two tones combined to capture a vision of America that was grounded in tradition but evolving and fragmented.

Whether you agree or not, it was a tough listen. Smart Flesh plays no such games. Its tone is more unified, dominated by the sensitive end of The Low Anthem’s spectrum: while its predecessor is difficult to define, Smart Flesh is unquestionably a folk album, a record of acoustic guitars, banjos, vocal harmonies and timeless tales. The rock is still there on Hey, All You Hippies! and Boeing 737, but now it pours out in a more controlled fashion – so as not to stamp all over the delicacy of the other songs, but to complement them. Indeed, Boeing 737 is a huge, stomping anthem that sounds like Bob Dylan fronting Arcade Fire. If The Low Anthem don’t release it as a single, they’re mad.

The rest of the album is easy-going and mellifluous, songs built on the simplest of patterns. Each songwriter takes their turn, but the voices don’t compete with each other. So Ben Knox Miller’s Love and Altar, which shares a similar angelic tone to Bon Iver, blends seamlessly into Jeff Prystowsky’s Matter of Time, even though the latter’s vocal is gravellier. And then we get Jocie Adams’s clarinet solo on Wire, which is stunning.

Fans of Oh My God, Charlie Darwin may be disappointed by just how well Smart Flesh hangs together, and there is certainly an argument to be had here about whether this more unified sound is a little too predictable, a little too easy, to keep you gripped. There are lulls amongst these 11 tracks when your mind starts to wander – Burn doesn’t deserve its slot after Wire, and should have been dropped altogether, while some of the album’s later tracks seem to mimic what has gone before. An injection of passion towards the end would have helped: without it, Smart Flesh comes across as a little too atonal to be described as a classic. 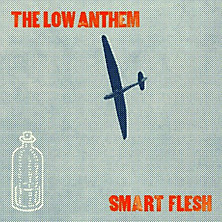