ABC The Lexicon Of Love Review

What a joy to hear this album again. It underpins just what a sharp band ABC were:...

ABC appeared at a turning point in pop, as the rough and tumble of post-punk gave way to a more sophisticated, lithesome Brit-funk, expounded by bands like Pigbag and Funkapolitan. Decked out in tailored suits and gold lame, the Sheffield quartet - fronted by the elegant Martin Fry - pounced onto dance floors in October 1981 with the splendid "Tears are Not Enough". "Poison Arrow" kept the blood circulating during the bitter winter of early 1982, before third single "The Look of Love" became their biggest hit. Then came the much-anticipated album, The Lexicon of Love. Now, over two decades later, their definitive statement gets the deluxe reissue treatment.

What a joy to hear this album again. It underpins just what a sharp band ABC were: witty, lyrical and very, very funky. Only Elvis Costello's Imperial Bedroom rivals this album for the smartest lyrics of 1982. And you can't dance to Elvis. Each track is a love affair in miniature: some are touching ("All of My Heart", "Show Me"), others a bitter invective at misplaced passion ("Many Happy Returns"). There is more going on in "2 Gether 4 Ever" than many bands squeeze into an entire album.

Band and producer Trevor Horn gelled immediately when they met to record : Horn described Fry's songs as "like disco, but in a Bob Dylan way". Dance music had rarely been as literate.

The extra tracks on disc 1 don't add a lot to the 1996 reissue, which expanded the original album with various jazz remixes and B-sides: notably their calling card, the James Brown-inspired "Alphabet Soup", and "Theme from Mantrap", their lounge version of "Poison Arrow". Disc 2 features some early demos and a previously unreleased live run-through of virtually the entire album, recorded during the band's heyday in 1982.

The Lexicon of Love stands as a landmark album in British pop. The synthetic Eighties' drum-thwaks and Chic-esque bass lines sound better now than ever. It gave disco a whole new vocabulary and helped pave the way for the dance movements of the late Eighties and Nineties. "I hold in my hand three letters," announces Fry on "Alphabet Soup". "Vitamin A, vitamin B and vitamin C". No prescription needed; no supplements required. This album replenishes mind, body and soul. 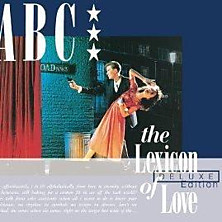