Pip Brown’s overdue second LP is as tight and catchy as a baseball mitt.

Even a staunch Ladyhawke supporter could be forgiven for approaching this record with caution. For a start, there's the title. Calling an album Anxiety hardly smacks of self-confidence, especially when that album is the follow-up to a well-regarded debut. Critics praised the first Ladyhawke LP when it came out in 2008; pop buffs wanted it to sell better than it eventually did.

Nor is the title entirely tongue-in-cheek. Pip Brown, the singer-songwriter behind the Ladyhawke name, piled so much pressure on herself that making this album "felt like a two-year-long anxiety attack". Factor in several delays to release date and an ugly cliché slithers onto the tongue…

Thankfully, notions of a "sophomore slump" can be dismissed. Anxiety is a pretty cracking second album, though it's not the second album fans might have expected. The first Ladyhawke record worked a twinkly synth-pop sound, prompting comparisons to 1980s pop idols Kim Wilde and Cyndi Lauper. This is an album of fuzzy guitar-pop tunes. In fact, Anxiety features no synths at all, only some retro-sounding organ parts from Pascal Gabriel, Brown's co-writer/producer on all 10 tracks.

Ladyhawke still sounds like Ladyhawke, just tougher and more muscular, like Ladyhawke after a boot camp. She's broadened her remit too. Anxiety's reference points range from the 1960s psychedelia of album opener Girl Like Me to Britpop and beyond: closing track Gone Gone Gone cribs its vocal hooks from The Dandy Warhols' 2000 hit Bohemian Like You.

In between, there are power-pop gems aplenty. Sunday Drive is a wistful mix of Blondie and 1980s Fleetwood Mac. Cellophane aims for the widescreen grandeur of David Bowie's "Heroes" and doesn't disgrace itself. Blue Eyes is an infectious Joan Jett-channelling kiss-off.

Infectious is a key word here. The anxiety of the title may permeate the lyrics – one song acknowledges the connection between "self-destruction", "self-obsession" and "vanity", while another pushes its luck by rhyming "cautious" with "nauseous". But it doesn't affect the quality of the music: Anxiety is as tight and catchy as a baseball mitt. On this evidence, one thing that needn't cause Pip Brown anxiety is her ear for a tune. 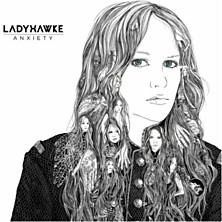