Hubert Sumlin About Them Shoes Review

...the overall mood is one of cultured grooving rather than wild abandon....

The bedrock of Hubert Sumlin's career was a two-decade stint in Chicago with the great Howlin' Wolf, where he was responsible for the searing guitar lines on monumental tunes such as "Smokestack Lightning", "Back Door Man" and "The Red Rooster". Following a certain amount of physical tension with the Wolf, Sumlin briefly defected to the Muddy Waters band. It's that period which informs this new recording, with most of its tunes penned either by Waters himself, or Chess Records' renaissance man Willie Dixon.

Hubert now lives in Milwaukee, Wisconsin, though he grew up in Greenwood, Mississippi, picking up his first guitar at the age of eight. He doesn't use a plectrum, preferring to stroke out bass notes with his thumb. Sumlin has used the same Fender twin-reverb amplifier for the last 30 years.

There's certainly no shortage of guitars here, with old Muddy sideman Bob Margolin partnering Sumlin's lead licks on most tracks. So often, when an old bluesman makes a new album, he's joined by a stellar cast of rock acolytes, paying their respects. This album is no exception, with Eric Clapton and Keith Richards joining in on the first two cuts. The Stones guitarist is at his earthiest on "Still A Fool", taken at a slugging pace, with a deep-feel, clumping beat.

James Cotton (another Muddy man) blows harmonica on "She's Into Something", and The Band's Levon Helm drums on most of the songs. Other numbers feature a blurry rotation of singers, with Sumlin himself saving his lone contribution until the closing "This Is The End". Frail and cracked though his voice may be, it would have been nice to hear Hubert take the lead vocals more often. David Johansen's two contributions are the most successful, with the former New York Dolls singer diving nearly as deep as Muddy Waters himself.

Sumlin's solos chop between drenching bursts and carefully-picked phrases, and the overall mood is one of cultured grooving rather than wild abandon, infused with a very natural, organic tone. 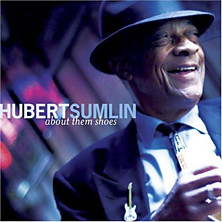