With so many indentikit-indie bands doing the rounds these days it’s good to come across a combo that manage to refresh, recharge and reinvigorate the palate. Although they've only been around for five years, Underground Railway have covered a lot of ground in that time. Formed in France, the trio of guitarist Marion Andrau, drummer Raphael Mura and bassist JB Ganivet relocated to live it up in London's bedsit land, released their debut album, Twisted Trees, last year and after touring Europe opening for Dinosaur Jr., ended up in Seattle earlier this year to record with producer John Goodmanson.

It's a partnership that has paid off, with Goodmanson, best known for his work with Death Cab For Cutie, seeding the material with an atmospheric gloss and raising the band’s game somewhat. There's a broader musicality and sense of increased maturity throughout the album and happily comes without losing Underground Railroad’s manic angularity and their Spartan brand of shock and awe dynamics.

Whilst several tunes hop aboard the verse-chorus merry-go-round many do not, moving off from one place and ending up somewhere very different. Poems For Freaks sits brooding and largely static for most of its three and a half minute life-span before erupting into an idiot-glee resolution that wouldn't sound out of place on an early Blur album.

Whilst there's a necessary equality in the way the work is shared out in a rock trio, inevitably perhaps it’s always the guitar that grabs the limelight and in this respect, Underground Railroad are no different. Andrau's daubs and rushes at the strings of her guitar like some crazed fauvist; stroboscopic chord-slashing, haunting ripples of nightmarish notes and clusters of jagged hooks all provide the record with an embarrassing surplus of bright, sometimes garish colours.

Cooking up a cocktail of guitar noise is always going to invoke Jesus Mary Chain or Velvet Undergound and whilst such echoes can be found in tracks such as Stuff In Your Pocket, there's also the terrifying pop-clarity of the Beatles/REM style mash-up of Kill – surely one of the best singles of the year! Irresistible thumping avant-pop. 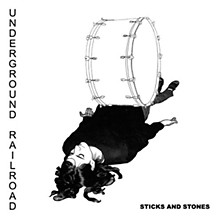