Dave Holland What Goes Around Review

It may seem an odd word to use about a musician who swept the board in the recent annual Downbeat critics poll, but this album is very promising. There are already quite a few milestone albums in Dave Holland's ECM recording career; Conference of the Birds, his stunning debut as a leader, Jumpin In, which introduced his first quintet, and Points of View, the first album from his current quintet, are just the most obvious ones. What Goes Around can be added to that list. In time, it will surely acquire significance as the debut album of Holland's Big Band. It is a solid beginning rather than a sparkling one, but it has many tantalising avenues that cry out to be developed further. As Holland himself has commented about this band, "Something has been put in motion, and suddenly I see what the next ten years are going to be about."

Holland has long had the knack of putting bands together that blend youth and experience into an integrated whole. And so it is here, with players of the stature of Earl Gardner, Antonio Hart and Gary Smulyan being joined by exciting younger players such as trumpeter Duane Eubanks and trombonist Josh Roseman. The resulting band combines the close-knit feel of the quintet with the power and variety of a big band. Holland's own playing is one key element of that synthesis. So too is Nelson; the vibes give a lighter, freer feel to the ensemble than a piano ever could. At its best, this music defies gravity.

With the exception of the newly composed "Upswing", all of the material here is familiar from Hollands small group recordings; "Shadow Dance" and "First Snow" from Jumpin In, "The Razors Edge" and "Blues for C. M." from The Razors Edge, "Triple Dance" from Triplicate and "What Goes Around" from last years Not for Nothin'. There is great fascination in hearing how Holland has reinvented those pieces for this ensemble. As with any decent big band arrangements, he has played to the strengths of individual band members, allowing them space to stamp their personalities on the pieces. For evidence, just listen to Antonio Hart and then Chris Potter seize their solo opportunities on "Shadow Dance" and make it their own. Nonetheless, I look forward to hearing this band playing new compositions written just with them in mind.

To quote Holland again, "I feel like I just scratched the surface. It's a longtime adventure thats just beginning." On this showing, the future looks bright.

Like This? Try These:
Dave Holland - Not for Nothin'
Chris McGregor's Brotherhood of Breath - Travelling Somewhere
Tomasz Stanko - The Soul of Things 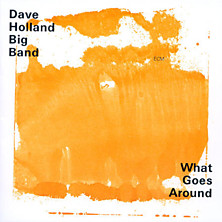