Pull up a chair, pour a glass of your favourite poison and listen up good.

A perennial outsider since his first album was released on the venerable Folkways label back in 1964, Michael Hurley infrequent career could be a textbook on dodging the spotlight.

Absorbing Jelly Roll Morton, Burl Ives, Hank Williams, and Bo Diddley (to name but a few) in his youth, Hurley’s itinerant life revolved around drawing, hitch-hiking and a dedication to wine, women and writing songs.

Falling in with trad-folk terrorists, The Holy Modal Rounders, who covered several of his tunes, Hurley was a near neighbour and regular visitor to the Greenwich Village folk scene. Yet he was just as likely to be found picking crops as picking a guitar during the 60s.

With a fair chunk of his 15 albums (more if you count side-projects and cassette only output) sporadically recorded during five decades either out of print or available as self-released CDRs, this disc on Devendra Banhart and Andy Cabic’s Gnomonsong label could well swing some well-deserved attention his way.

Blessed with a voice that makes Leon Redbone, JJ Cale and Ry Cooder all sound like a bunch of prissy stage-school elocutionists, Ancestral Swamp is a welcome pit-stop on Hurley’s lo-fi travelogue across the myths and backwaters of rural America.

Every year of his colourful life has been etched deep into leathery vocal chords, lending tunes like “Dying Crapshooter’s Blues”, “Lonesome Graveyard”, “Gambling Charley” and a surprisingly moving rendition of “Streets Of Laredo”, with a bleary, weary dust-covered reportage.

Populated with losers, sinners and saints, their histories are embellished with an instrumental technique that is perfunctory but perfect for the job. His picking and rhythm erratically flit between notes as though he’d recorded the whole thing on the back of a pick-up truck trundling down a pitted dirt track.

Despite the stripped-back sound (or perhaps because of it), Ancestral Swamp is a rich affair, filled with the presence of a man who’s been around some and has a bag full of tales he wants to tell you. Pull up a chair, pour a glass of your favourite poison and listen up good. Chances like this don’t come around very often. 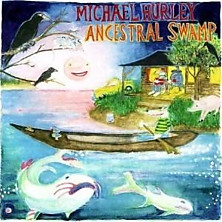