A swinging debut set harbouring riffs and hooks which easily hop across the decades.

To look at him, you wouldn’t suspect Oklahoma’s JD McPherson of being a former schoolteacher. In fact, you’d be more likely to guess that he was a freelance hot rod mechanic, fond of painstakingly applying equal amounts of grease in his hair and the engines of classic powder blue Buicks.

McPherson’s debut solo album, though, will certainly be an education for some, drawing so heavily on retro rhythm and blues that you’d be forgiven for thinking it was actually a lost 1950s gem discovered by a crate-digging, vintage vinyl obsessive.

Fully indebted to a bygone age it might be, with its talk of Cadillacs, savoir-faire and “scratching circles on the old dancefloor”, but Signs & Signifiers doesn’t seem fusty or dated. It is instead, pure-and-simple party music, make-out music and get-down-and-shake-it music, harbouring the sort of simple riffs and hooks that easily hop across the decades.

By taking things back to the roots of rock’n’roll, McPherson’s zeroed in on the very reasons why this kind of music first came about: to provide a soundtrack for newly anointed teenagers to shake loose, carve out their own stake in society and, let’s not be coy here, get laid.

Not quite a teenager himself, there’s still a youthful ardour in his approach. He’s not above including an unabashed pop moment in the shape of the incendiary North Side Gal. A speedy stroll with push-pull horns, an indelible backbeat and a story of unrequited love, or at the very least, one-sided lust, it’s enough to make even the staunchest of quiff-phobics break into a jive.

His cover of Austin, Texas rockabilly band The Bellfuries’ Your Love (All That I’m Missing) packs a mightier punch than the stripped-back, skiffling original; but A Gentle Awakening walks a slower path, a poised breather in an album full of jitterbugging jollity and brass band swinging.

Laced with subtle, symphonic Sam Cooke stylings, it’s the understated star of the show and one of the few songs of the 12 here that broaches the three-minute mark. It’s also during this twilight reverie that McPherson seems to push the throwback envelope the hardest, showing that if he ever wanted to break out of his old-school bubble, he could do so in a heartbeat. 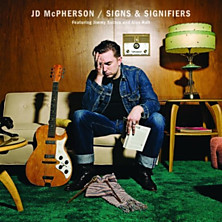