Another gift of an album from the Grammy-nominated pianist.

The huge success of Vijay Iyer’s 2009 album Historicity shot the US pianist into the front rank of global jazz stars – and it’s likely his schedule got just a little bit busier, too. This latest album addresses the sense of life – his, ours, everyone’s – speeding up, becoming more hectic, more densely packed with incident and information. In the title-track, manic acceleration based around a puttering electronic beat clearly signals 21st century modern madness, of the universe rushing headlong towards maximum novelty. And on Actions Speak, his galloping Steve Reich-ian figures evoke the zooming headlights and crowded streets of the cult 1982 movie, Koyaanisqatsi.

But rather than dystopian warning, Accelerando is ultimately a statement of compassion and wide-eyed wonder. Nowhere is that more apparent than in Iyer’s take on the Michael Jackson hit Human Nature, which he previously tackled on his album Solo in 2010. Here, stretched out in a trio format, the tune becomes a love note to humanity, with Iyer’s huge, expansive arpeggios singing out a big-hearted joy of existence. Much of that warmth stems from the fact that it’s such a well-known melody, and Iyer clearly has a penchant for interpreting other people’s tunes. So, Mmmhmm re-imagines Flying Lotus’ sci-fi electronica as swiftly skipping piano ruminations, while the trio ramps up the intensity on Heatwave’s The Star of a Story, transforming it from sultry soul croon to a trancey jam with some of the off-centre propulsion of Talking Heads’ Once in a Lifetime. In fact, throughout the whole album, the rhythm team of bassist Stephan Crump and drummer Marcus Gilmore have an uncanny knack for unpicking rhythmic structures and reassembling them as oddly counter-intuitive and limping riffs that somehow still manage to maintain a satisfying sense of swing.

Still, for all the trio’s evident joy at sharing these adventures, there’s no denying this is Iyer’s date. His original compositions show a puckish intellect at work – from the light-footed vamp of Optimism to the dark funk of Lude – and his solos soar with a roaring confidence, authority and agility: in the space of one chorus he’s capable of throwing together hints of Latin, melodramatic flourishes and the kind of single-line linear logic Herbie Hancock perfected when he was working for Miles Davis.

This album is a gift from Vijay Iyer. We should be grateful. 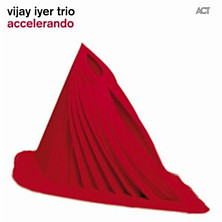