The New York-based singer has a voice and musicality to be reckoned with.

Apart from the obvious exception of José James, new male African-American jazz singers are becoming a worryingly rare breed. Whither an Oscar Brown Jr for the Obama years, a vocalist willing not to remove his shirt to reveal pectos to match Ne-Yo’s? Soberly adorned by dark jacket and magnolia muffler, Gregory Porter might well be the talent ready to fill that gap.

This auspicious debut, which showcases a well-drilled acoustic band whose horn section features veteran alto saxophonist James Spaulding, harks right back to the heyday of a Brown Jr or a lesser-known singer such as Bill Henderson insofar as the artist’s voice is deployed with the kind of stealth as well as power that imbues the set with a measured, graceful lyricism, no more so than on a crystalline reading of the Carmichael/Mercer standard, Sklylark. The way that Porter, a New York-based Californian who has spent long years in musical theatre, discreetly stretches out languorous notes in the coda, letting them flicker over a slowly ebbing piano, is quite masterful, nailing the essentially wistful nature of the piece without overloading the emotion.

In contrast, one could point to his much more muscular attack on originals such as Wisdom and 1960 What?, in which Porter combusts into a full-on gospel soul man with distinct echoes of Donny Hathaway. The other common denominator with the aforesaid is the marked social and political statements that crop up throughout the programme. Like the best of singers, Porter is above all a musician and it’s not for nothing that he shares arranging duties with producer Kamau Kenyatta and pianist Chip Crawford, whose mixture of resonant chording and concise, concentrated improvisations bring both sobriety and flourish to the set.

Time and time again, he solidly anchors the song structures in spare modal harmony as well as a fair amount of swing, whether the tempos are high or low. Things conclude with a charged a cappella take of Feeling Good which resolutely announces that Gregory Porter has a voice and musicality to be reckoned with. 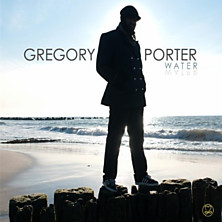