A classically indebted but resolutely modern collection of ambitious arrangements.

As a member of Battles, who with Atlas scored a krauty math-rock hit that was popular enough for the Skins soundtrack, Tyondai Braxton is already accomplished when it comes to opening up apparently inaccessible music to new audiences. His father is Anthony Braxton, the avant-garde composer who crossed jazz with classical theories and sensibilities, offending jazz purists who wanted their music to eschew any European influences.

Recorded with The Wordless Music Orchestra and The Young New York City Ensemble, Central Market revises 20th century classical music with analogue wit. Opening Bell starts with fuzzes and a piano, progressing via stabs of horns and electronic birdsong into the kind of loony melodic experimentation associated with Battles. On The Duck and the Butcher, a persistent quack engages in an intricate dialogue with percussion, a harp, and a viola. The effect is unexpectedly delicate. Platinum, the ten-minute centrepiece, combines alarming brass blares, racing drums, agitated strings and happy whistles – it sounds like Leonard Bernstein scoring a Disney film.

One of Braxton’s key influences is Igor Stravinsky’s 1917 Song of the Nightingale. The post-impressionist composer’s The Rite of Spring famously sparked near riots because of its unheard-of combination of dissonance, atonality and repetition, and Bernstein’s recording of it is well known. Everywhere in Central Market, peculiar belches sit beside big brass statements, and technically intricate passages are interrupted by dramatic surprises. Braxton’s father’s defiance, as well as his own influences (including Philip Glass and Karlheinz Stockhausen), act as tangible forerunners to this brave fusion of the mechanical and the organic.

Though it pursues futurism, Central Market actually gazes backwards in time through its maker’s personal musical lineage. Furthermore, all the elements that were associated with primitivism in Stravinsky’s work – the tributes to birdsong and the circular, cacophonous evocations of the cycles of nature – are put through post-rock and electronic filters. These technological innervations create an impression of the comic and carnivalesque as much as of the future post-Stravinsky, or post-Bernstein recording Stravinsky; electronics primitivise the work even more.

Central Market is delightful, and what Stravinksy, Bernstein and Anthony Braxton all have in common is their popularising of the classical. In this respect, Tyondai Braxton’s achievements here are true to their inheritance, and this album deserves to sell. 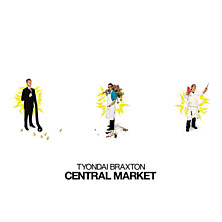