The album is sophisticated, accessible R&B

Recorded in 1994, but released two years later, Maxwell's Urban Hang Suite still sounds as if it was made yesterday. It is a heartfelt, soulful album that praises monogamous love. Released at the height of hip-hop’s popularity, it was a novel idea, and one that slowly and surely caught on.

Although the name of the genre was coined a couple of years later, the album can be seen as the birth of Neo-Soul. Like his peers – most notably D'Angelo – Maxwell's songwriting can be seen as a direct homage to the work of Stevie Wonder and Curtis Mayfield.

From the scratched vinyl introduction to the loose, late night soul of The Urban Theme, the album is sophisticated, accessible R&B. Ascension (Don't Ever Wonder) was the rightful hit single and the nagging funk of Dancewitme demonstrates the album is not all about the bedroom. The spirit of Prince hovers in the mix as well, especially on Lonely's The Only Company (I &II).

What sets this album apart was the simple economy of Maxwell's vocals. There is almost nothing extraneous in his performance; everything is to the point. For example, the album's tender ballad, Whenever, Wherever, Whatever could easily have drowned in a sea of extemporisation in other artists' hands.

Collaborators here include soul legend Leon Ware, who wrote most of Marvin Gaye's I Want You album, and Gaye's guitarist himself, Melvin 'Wah Wah' Watson. Also present is Stewart Matthewman, the multi-instrumentalist at the heart of Sade, no stranger to contributing to radio-friendly mellow grooves. Yet, with all these people on board, it is still unmistakably Maxwell's work.

Maxwell's Urban Hang Suite established Maxwell as a serious and lasting performer. It became a Top 30 UK hit and went on to sell over a half a million in the US, earning him a Grammy nomination, and that very mid-90s accolade, his very own MTV Unplugged special. 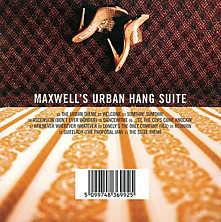