An auspicious debut from guitarist Dan Messore and some accomplished colleagues.

Guitar and tenor saxophone provide, in the right hands (and mouth), a rich palette of sounds. Because that particular horn can be cheerfully light as well as broodingly low, lending tonal depth without being overly bulky, and the string instrument can be both delicate and incisive, their union has scope for sensual, fluid lyricism that retains ballast.

In other words, music that is sharply gentle rather than sleepily genteel. It is a fine line, but guitarist-composer-bandleader Dan Messore, a 2006 graduate of the Royal Welsh College of Music and Drama who has also played with Kevin Figes and Trish Clowes, adroitly stays on the right side of it on this auspicious debut. Iain Ballamy plays the tenor saxophonist role, so Messore has a frontline partner of considerable experience who brings the requisite poise and drive to make this kind of endeavour work.

Ballamy’s breezy, airy timbre is perfect for the floating character of many of the melodies; yet he hardens his sound on occasion, which is important for moments when the guitar chords are wiry and not so note-heavy. The music doesn't feel invertebrate as a result. Double bassist Tim Harries and drummer Gethin Jones reinforce this balance, hovering right between a mellow simmer of swing and straighter folk-blues rhythms to good effect.

Messore puts his stamp on the set with some authority though, moving from woozy yet always understated pitch bends or distortions à la Bill Frisell to the kind of rapier-like single note solos that have a concision that is sometimes missing in younger musicians gripped by an impulse to play rather than think and serve the story of the song. With dreamy, hazy themes being the order of the day it’s fair to quote names like Pat Metheny and the aforesaid Frisell as references, but the seam of jazz Messore is mining goes further back to such as Charlie Byrd and Jim Hall. Messore invites us to imagine that grand old guitarist deconstructing Greensleeves with Warne Marsh rather than Sonny Rollins. Talking of colours, Indigo is an apt name for Messore’s dark subtleties – but his future is bright. 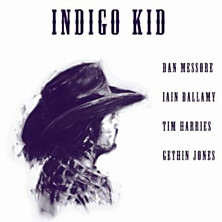