The prolific Truckers hit yet another career peak.

Georgia-based rockers Drive-By Truckers have to be one of the most prolific bands working today; ninth LP Go-Go Boots comes less than a year after the release of its predecessor The Big To-Do. The songs for both albums were recorded during the same sessions, with the more strident rock‘n’roll tracks released first. Go-Go Boots is no haphazard collection of leftovers, though. It’s a well-crafted set of weatherworn country, soul and Southern blues that makes up for its lack of stomping riffs with raw emotion and a more diverse sonic palate, particularly indebted to the Muscle Shoals country-soul sound that the band grew up with.

While The Big To-Do felt a little patchy between its big numbers, Go-Go Boots is rock-solid throughout. The mix of different styles, all filtered through the lenses of lead songwriters and vocalists Patterson Hood, Shonna Tucker and Mike Cooley, effortlessly sustains the album through its 14 tracks and 66-minute run-time. The Truckers have always been evocative small-town storytellers, and these tracks are no different. Used to Be a Cop sees Hood inhabit the ragged old bones of a tired ex-cop riding a mean streak of bad luck, accompanied by a funk-inflected bassline and resigned slide guitar. Tucker’s voice evokes the tear-stained cheeks and bleary panic of a faithful girlfriend searching about town for her missing lover on Eddie Hinton cover Where’s Eddie. Cooley ekes every drop of yearning from the simple line "I think about you when I can / and even sometimes when I can’t, I do," on banjo-pluckin’ tearjerker Cartoon Gold.

It’s this Hood/Cooley/Tucker trifecta that makes Drive-By Truckers such a consistently fresh proposition. Apart from allowing the band to crank out records at the speed of sound, each of the three brings their own angle to the songs. Hood is the go-to guy for full-bodied, heart-on-sleeve rock; Cooley is the band’s strongest connection with that stiff-backed, Willie Nelson-esque bare bones country music; and Tucker brings a sparkling voice and a much-needed female perspective to break up all the bruised masculinity on show. Go-Go Boots is one of the best examples yet of the separate yet complementary skills of the Truckers’ three leaders, melding styles and switching moods but retaining an overall feel that’s distinctly theirs. 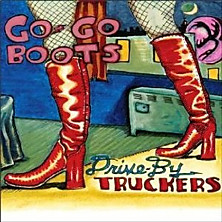