Despite the most monumental of obstacles, this is an overwhelming success.

This is only the fourth studio album from seminal-to-many grungers Alice in Chains. For a band held in such high esteem, you’d expect this to be somewhere closer to double figures. But no, and this record makes it clear why with numerous nods towards lead singer Layne Staley’s tragic death in 2002, over seven years after 1995’s self-titled third LP. This is business that the Seattle-based troupe is clearly keen to persevere with.

New singer William DuVall – a hardcore singer from Atlanta, Georgia – is almost indistinguishable from Staley in terms of pitch, tone and delivery, but his involvement is far from a simple exercise in rock karaoke. While Staley was always the undisputed frontman of the band, it was the vocal dynamic between him and lead guitarist Jerry Cantrell which really carried the band to the heights they ultimately reached.

While Cantrell and DuVall have been friends and touring buddies on the guitarist’s occasional solo jaunts, the heartfelt harmonies of old have made way for alternating vocals with one or the other more likely to take duties at any one time. The subject matter is just as honest, bitter and fuelled by self-hatred and despair as old fans of Alice in Chains could have hoped for.

While half of the album is delivered in the trademark snarling fashion of second single Check My Brain and the relentless but melodic chugging of Last of my Kind and A Looking in View, the title track is wholly indicative of the record’s musical flipside. Featuring tinkled ivories from none other than Elton John, the touching ballad serves as a fitting tribute to the band’s late friend and colleague.

They slip into the gentle balladeering more frequently than you might expect, but with a songwriter of the calibre of Cantrell there are always surprises and, in this case, they’re more than welcome as the band showcase their all of their talents with ease, and often overwhelming elegance.

The fact that Alice in Chains still sound like Alice in Chains means that Staley’s tainted talent will never be forgotten. Every single one of their fans from a decade ago should be able to slip seamlessly back into the routine of this fantastic band. Despite the most monumental of obstacles, Black Gives Way to Blue is an overwhelming success. 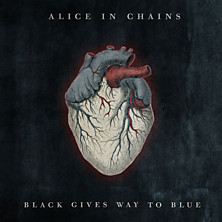