Cowley's very usage of the term 'trio' when naming his band suggests that he's quite...

This is the follow-up to Displaced, British pianist Neil Cowley's 2006 debut disc. It exudes a strong sense of the trio having strengthened a particular style, even if this involves a grafting of traits enjoyed by e.s.t. and The Bad Plus. The latter's anthemic tendencies gush all over His Nibs, providing this album opener with a sturdy, nay bullying, illustration of power trio potentiality. Like many others who are having their jazz cake and eating it, Cowley is cleverly laying his classicist moves over a driving rock beat, with drummer Evan Jenkins forever threatening a fully metronomic conversion. He's always slyly funking up, besides adding enough fidgety syncopation content, so that the hardcore beatniks don't become too alienated. It's a successful approach, as pedantic music critics are the only folks who will nowadays still insist on all of this compartmentalising for rock, jazz, funk et al.

Call this pomp-jazz, canny but not compromised. Cowley likes to hammer, in the frilly-cuff fashion. Dinosaur Die builds up a rising curve of repetitive minimalism, then Ginger Sheep decides on a knees-up vaudeville romp, like a Keystone Cops chase theme. The evocative images remain for Clumsy Couple, which is suitably ungainly, painting scenes of a faded ballroom triumph, now a decayed memory. We Are Here To Make Plastic is an agitated combination of Motörhead bonce-banging and the rippling player piano monomania of avant composer, Conlon Nancarrow. Cowley's very usage of the term 'trio' when naming his band suggests that he's quite happy to be viewed as a jazzman. Only the hoariest old relics from within that scene could possibly object to the unsuitability of either his compositions or his chops. 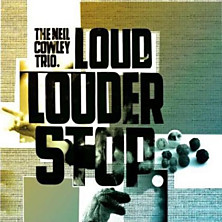