This revisiting of Shaw’s songs has produced some ear-pricking results.

Nine times out of 10, if a composer fades into obscurity after his or her death it’s because their output wasn't sufficiently remarkable to stand the test of time. However, this revisiting of Martin Shaw’s songs by Iain Burnside and his singers has produced some ear-pricking results.

Shaw was born in 1875, composed through two world wars, co-edited the Songs of Praise hymn book and The Oxford Book of Carols, and died in 1958. During his lifetime, he was sufficiently well known and respected for Benjamin Britten to commission him to write for the first Aldeburgh festival in 1948. Nowadays though, if he’s remembered at all it’s as the man responsible for the ever-popular hymns Morning Has Broken and Hills of the North, Rejoice.

So, is such posthumous obscurity understandable, or a travesty? Well, probably both. Shaw was writing within a British musical climate that was absolutely dominated first by Vaughan Williams, and then by Britten. You had to have a pretty loud musical voice to be heard over the top of them, and Shaw, with an output consisting of easy-on-the-ear anthems, hymns and songs, did not. In fact, his only large-scale work, a 1926 “ballad-opera” entitled Mr Pepys, sunk without trace.

Still, there's more to life than operas and symphonies. The 36 songs on this disc are captivating for their directness of expression, strong melodies and evocative texts, and beguiling for the fact that all this musical plain-speaking sits atop a more ambiguous and transient harmonic palate. Indeed, transience is a recurrent theme, the spectres of loss and death ever-present whether through German guns or malevolent sprites. Andrew Kennedy picks up on this touchingly in Over the Sea, his rise of a fifth at the end of each stanza hauntingly dying away as if carried off across the waves by the piano. This link between piano and voice permeates the entire recording: there's an abundance of sensitive, sympathetic readings in which singer and pianist dovetail into one, whether the song in question is simply an enjoyable little vignette, or whether there have been deeper levels to draw out.

It's highly unlikely that Shaw will ever achieve notoriety beyond that of an interesting A.N. Other of 20th century English music. But even so, it would be wonderful to think that this massively enjoyable disc might at least land a few of his songs into more established positions within the solo repertory. They do deserve that much. 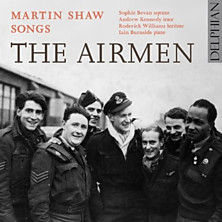