A watershed album on the cusp between their underground appeal and stadium future.

It might be news to anyone born after the mid 1980s, but R.E.M. – these days grizzled, arena mainstays whose every new album seems to trump its predecessor for blandness – were once cerebral guitar music’s great white hopes, their records and live shows investing ‘alternative rock’ (a US taxonomy effectively invented to contextualise the band) with a potent cocktail of opaque Southern mystery, pealing Rickenbackers and heart-stopping choruses.

Their critical zeniths remain 1983’s debut, Murmur, and 1992’s Automatic for the People, bookends to an extended purple patch that saw R.E.M. rise from Georgian underground anonymity to global superstardom; their beguiling inscrutability and left-leaning political advocacy largely intact. Released in the summer of 1986, the grammatically challenged Lifes Rich Pageant was their fourth long-player and, with hindsight, a watershed album residing on the cusp between the group’s initial chiming-but-oblique garage-rock signature and the stadium-tailored sound of the albums with which they would seduce the world later in the decade.

Those latter records would find vocalist Michael Stipe jettisoning the incomprehensible murmurs that defined his early approach to the frontman’s microphone, a new-found clarity which had begun to manifest on LRP. This was also the album on which Stipe’s polemical muscle was first flexed in anger, with songs like the soaring, acid-rain protest Fall on Me and poignant, anti-CIA exposition The Flowers of Guatemala addressing the ills of Reaganite America with relatively little ambiguity.

All of which is not to downplay LRP’s musical qualities – something which EMI’s glistening 25th anniversary remaster does nothing to diminish. Hallmarked by guitarist Peter Buck’s ringing arpeggios and Stipe’s hymnal ululations, urgent, dynamic rockers like I Believe and These Days remain as fresh, euphoric and undeniable as they were in the grim days of Chris de Burgh’s Lady In Red and Europe’s The Final Countdown, while the swaying, folk-tinged, if lyrically impenetrable, Swan Swan H is arguably the most beautiful slow song in the R.E.M. canon. A cover of The Clique’s 1969 bubblegum pop nugget Superman (not to mention some ditzy instrumentals found amid robust album demos on a bonus disc), meanwhile, proved that these sometimes solemn young Southerners also knew how to get their musical kicks. 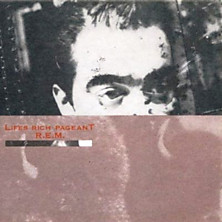