Monkey Journey to the West Review

Monkey represents a really intelligent and successful attempt to fuse East and West...

Anyone who was convinced that this was the year of the rat must, by now, be realising that, in fact, the animal that's making 2008 its own is the monkey. In 2007, Damon Albarn and graphic artist pal, Jamie Hewlett - the men behind Gorillaz - premiered their latest outside-the-box project: Monkey: Journey To The West, and it's been wowing the critics ever since. Combining Hewlett's distinctive comic-book style, circus acrobatics and Mandarin Operatics, it's amazingly reaching out to folk for whom even Gilbert and Sullivan is a stretch. But how does the soundtrack fare without the astounding visuals?

Everyone who has seen the two-minute animated ident for the BBC's Olympic coverage will have a pretty good idea what to expect: Bubbly analogue synth arpeggios, angelic Chinese vocals and a whole plethora of Eastern instrumentation combined with Western dance tropes. Pretty much like Albarn's other recent project, The Good The Bad And The Queen, this audacious mixture may look unlikely on paper, but in the flesh it makes for a delightfully offbeam delight. The mixture veers widely from Cantonese pop via totalitarian overkill (The Dragon King, March Of The Iron Army) to electronica (Monkey Bee) and dissonant musique concrete (Tripitaka's Curse). True enough, every once in a while Damon's older work pops up, as on the Gorillaz-like O Mi To Fu, but, surprisingly, some of the most successful stuff here is the straight ahead, brass-led classical work like The White Skeleton Demon or the closing Disappearing Volcano. It seems Albarn really is a proper musician.

Only on rare occasions do you get the feeling that the duo are cultural tourists. One suspects that Heavenly Peach Banquet was dredged from Albarn's boyhood TV habits watching The Water Margin (a great fantasy kung fu serial whose theme tune was equally sweetly naff). And Battle In Heaven's mesmerically repeated string loops that slowly lapse into nightmarish dissonance recreate the wobbly degradation of a worn out kung fu film soundtrack.

What is odd is considering just how widely bought this oddity will be. One suspects that about 50 percent on offer will not prove to be on the majority's repeat playlists. But Monkey represents a really intelligent and successful attempt to fuse East and West in new ways. And for that alone it is a triumph. 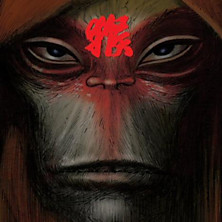