It drifts into your dreams and hangs about there, being nice and reminding you of...

Clearly, Karen drifts from Vienna via Gothenburg to Barcelona, gypsying through cabaret and twinkly avant-pop. Tanja Frinta sings in a sweet and funny accent, accompanied by a Mallorcan pianist and an Italian Drummer. The songs are equally pan-European: Wistful and serene cabaret huskiness gives way to off-kilter oompah ballads. Frinta's charming melodies owe much to the musicals of her youth and Weimar cabaret. They are a perfect companion in her lyrics: Stories about owls and carousel horses and her take on falling in love in Paris via the story of inventor 'Professor Dragon'. They display her fecund imagination.

But Lonely Drifter Karen draw you in to their magical world primarily with good music. The arrangements, by pianist Marc Meliá Sobrevias, make the most of piano and subtle percussion (courtesy of Giorgio Menossi) and also Wurlitzer and music-box, creating a rich landscape on which the stories are played out. Imagine songs like True Desire or Climb zoom fast over little hills, or imagine trotting along to La Hierba Canta.

Sometimes the grass sings a familiar song. Many snatches of tunes and sounds are used elsewhere, but the sonic world created by LDK is deep and robust enough to own them. Frinta's voice can sometimes become annoying - a bit lonesome and lackluster - but like Joanna Newsome or Hanna Hukkelberg there is an undeniable and earnest sweetness; you get into it eventually. And as in the song Casablanca, just as you think you've had enough the melody switches and a totally different door creaks open. This is the most enjoyable aspect of this album; it drifts into itself and then out again. It drifts into familiar territory and then away. And eventually it drifts into your dreams and hangs about there, being nice and reminding you of things you thought you had forgotten. 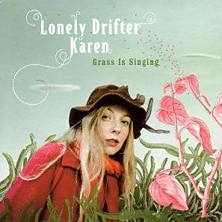