...a double-CD of feel-good dance music from yesteryear.

Disc 1 is mostly 1950s R&B, while Disc 2 collects vintage ska and bluebeat. A handful of the 51 tracks will be familiar to a wider audience, but the majority are obscurities, many getting a very welcome first outing on CD. Stand-outs are a killer version of "Drinkin Wine Spo-Dee-O-Dee" by New York guitarist Larry Dale, and the divine voice of Desmond Dekker telling the tale of "Fu Manchu'".

There's also room for both Gaz himself, with his Rebel Blues Rockers, and his dad, John Mayall, performing "I'm Your Witch Doctor". 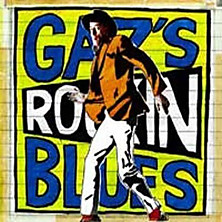