British producer plays weird with his inspirations on a seductive debut.

Lapalux, aka 25-year-old producer Stuart Howard, hails from nowhere more glamorous than the countryside of rural Essex, but the music he makes is maddeningly, defiantly unplaceable, in time or space.

That his debut album Nostalchic lands on Steve "Flying Lotus" Ellison’s LA-based label Brainfeeder – the result of a fortuitous shot-in-the-dark email a couple of years back – is probably the best signpost to the way his music sounds.

It’s a psychedelic melange of snappy RnB swing and oozing synths, pitch-effected vocals and IDM-ish structural abstraction that sounds translucent and slippery to the touch.

Modern American RnB, for so long the subject of critical disrespect, is enjoying new credibility, and a new generation of producers toying with the form have raised very valid fears about the genre’s gentrification.

Lapalux makes a determined effort to play weird with its sources of inspiration – The Dead Sea deep-buries a sax break under shimmering choral voices and glutinous beats, while Kelly Brook is luscious jazz-funk sprayed with glottal rap snippets and pushed through the Squarepusher mangle.

All the same, though, Nostalchic has a certain airiness, a focus on floaty atmospherics, that aligns it with the work of other washed-out boudoir crooners such as The Weeknd and How to Dress Well.

It comes together best when Howard makes good use of a vocal. One Thing, featuring a cameo from Def Jam newcomer Jenna Andrews, sounds like codeine feels, slurred and woozy, while Without You warps Kerry Leatham’s vocal into something curiously androgynous.

Without such turns, Nostalchic can meander, and at times you feel like it is to modern RnB music as the output of labels like Def(initive) Jux and Anticon were to mainstream 90s and 00s hip hop: sonically seductive, but culturally, perhaps a bit of a cul-de-sac.

Still, that’s what many thought about Hudson Mohawke at first, and now he dines at hip hop’s high table. There’s enough good ideas here to suggest Howard might find himself on a similar trajectory. 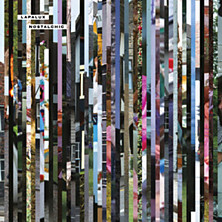