UB40 Who You Fighting For Review

The groups gift for instant and accessible melodies is undiminished.

If it comes as some surprise that UB40 are celebrating a quarter-century of success since their first hit, it seems even more remarkable that this is their 23rd album. It's a rare act that can combine such longevity with such a high level of consistency.

That consistency is again the defining characteristic of their new album. For UB40, not much has changed in the years since they first made their debut Signing Off: they still purvey an orthodox reggae style, unfazed by all subsequent developments, as though we were still in the late-70s era of British bands like Steel Pulse and Matumbi (the latter's "After Tonight" is one of the five covers here).

But the sheer freshness and vitality of the music after all this time can't be denied. Still boasting the same eight-piece line-up that they started with, this is a band which sounds above all else comfortable and at ease with itself. There is a sense of such effortlessness about songs like "Sins of the Fathers" and "One Woman Man" that it's hard to believe that they're newly minted - like all great pop songs, they feel on first hearing as though they've been around for years. The group's gift for instant and accessible melodies is undiminished.

Lyrically too there's a toughness here that harks back to the early days: three of the first five tracks the title song, "Plenty More" and "War Poem" are political without being polemical, clearly inspired by the state of the world, but approached from a personal, human viewpoint. By way of balance, we end with a brace of lovely covers: a version of the Manhattan's soft soul classic "Kiss and Say Goodbye" that will surely become their 50th hit single, and the Jamaicans' "The Things You Say You Love".

Ali Campbell's sensitive, sometimes fragile voice remains the focal point of the band, but tribute should also be paid to the horn arrangements of saxophonist Brian Travers, which are a source of great joy throughout. They epitomise the simple but impeccable standards of the band. Contender for the summer album of 2005. 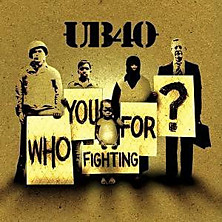