Winningly grandiose in places, but it’d have been better as a single LP.

Never one to lack hubris, Elton described this 80-minute double as his White Album. It’s sold over 30 million copies and is his most commercially successful studio album. His name was already made upon its October 1973 release, but this muddled magnum opus shunted him – with its astronomical US popularity – into the big leagues. Today, the famous sections sound great while the filler numbers (and there are quite a few) sound flimsy.

The original idea had to been to record in Jamaica, following The Rolling Stones’ example set with Goat’s Head Soup. But local unrest there led to a swift return to Chateau d’Herouville for the third consecutive album. In his comfort zone and full of confidence, John managed to concoct an invigorating brew of rock, pop, glam and music hall. If it tails off badly – the unspeakable truth is that GYBR would have made a better single album – it begins in winningly grandiose manner.

The epic Wagnerian strains of the Funeral for a Friend instrumental lead into the red-meat refrains of Love Lies Bleeding, where Davey Johnstone’s guitar, as so often, lends wings to a John/Taupin composition. The run of now-standards continues with Candle in the Wind (then a homage to Marilyn; later, notoriously, to Diana), the stomping glam-soul romp Bennie and the Jets (perhaps a fuzzy stab at a Ziggy Stardust fantasy), and the plaintive title song, in which the virtues of country over city are eulogised. "I’m going back to my plough," sighs Elton, in perhaps the least technically authentic line in pop history.

After the melodically rich This Song Has No Title, the decline kicks in. GYBR is very much a top-loaded collection, and the likes of Jamaica Jerk-Off and Dirty Little Girl are no contenders for greatness. What was side three showcases Taupin at his lamest: lines like "getting paid for being laid" remain excruciating. There’s a slight revival, however, in the final quarter. Saturday Night’s Alright for Fighting – again guitar-dominated – has outlived its Who-influenced, glam-era buzz and Harmony is a deft closer. Of these 17 songs, banged out in 15 days, half have become rock canon staples. 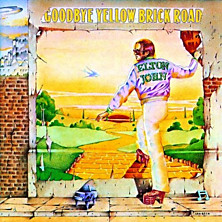