Primal Scream Give Out But Don't Give Up Review

Give Out But Don't Give Up wasn't completely amazing.

Hard to imagine now, but after the success and general cultural uprising of Screamadelica big things were being expected of its follow-up. After the Dixie Narco EP explored southern soul, wonky country and funk wig-outs, the Primals seemed capable of anything. Give Out But Don't Give Up - which, with the benefit of 15 years hindsight, isn't actually terrible - wasn't exactly what the new fans expected of a band that had become a cosmic, shape-shifting entity. Unfortunately as is often the case with that ability, some of the band had decided to get into hard drugs, and an ensuing US tour with Depeche Mode that nearly killed them.

Hanging with George Clinton – he contributes to the title track - and being produced by southern soul legend Tom Dowd and Black Crowes co-conspiritor George Drakoulias was a step on from their rave rebirth. Denise Johnson, who was now officially part of the Scream's orbit, had a turn with Free, but it was a mere glimmer of what heights had been previously achieved. Guitars were back in, and the ongoing Stones fascination was omnipotent. Tracks such as lead-off single Rocks and the highway rockin' Jailbird, along with the ballad (I'm Gonna) Cry Myself Blind were definite highpoints of a confused and occasionally misguided set. It is mostly these three tunes that remain in the Scream's live set today, although it must be said that when they headlined Reading that year, grown men wept as Mick Jones and Dave Gahan were brought on as special guests to pepper up one of their least inspiring periods.

So, Give Out But Don't Give Up wasn't completely amazing. It was a bit of a blip. By rights the Primals should've owned 1994, but Parklife and Definitely Maybe came along and suddenly having a confederate flag on your cover when everyone else is waving union jacks smacked of a band in need of a rethink. Thankfully, that was coming in the form of 1997's Vanishing Point. 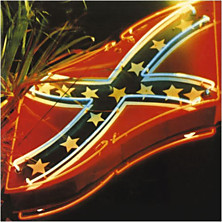