Harlem don’t want your brains – they want your shoes, the dancing kind.

We live in an age where NME readers – those who vote on the magazine’s website – consider junior space cadet Matt Bellamy, front-man of embarrassingly earnest proggers Muse, the greatest lyricist in rock music. An age where commercial indie has been irreversibly intellectualised through the success of Arctic Monkeys, revealing most other would-be social commentators with guitars – step forward, The Enemy – for the awful bands they actually are. So it’s wonderful, really, when an album drops that has no intention to engage on a particularly cerebral level, and simply preoccupies itself with making an audience smile like a bunch of asylum-overthrowing loons.

Harlem don’t want your brains – they want your shoes, the dancing kind. They want them scuffed and kicking up dust from the floorboards of whatever basement club they’re holding court in. They want to see you shake it, they want to be your baby for an evening, and they want no commitment on your part. The only promise the listener need make is to let themselves go, for 16 tracks that rattle and roll for 40 minutes. Paul Weller’s latest, Wake Up the Nation, managed 16 in an hour and its maker was celebrated for crafting such a triumphantly taut collection. Assessed on similar terms – brevity equals immediacy, turning thumbs up from attention-span-challenged audiences – Hippies is the work of geniuses.

They wish. Or, more likely, not. There are no signs here that the Austin-based outfit aspires to arrangements more challenging than their current concoctions – endearingly low-of-fidelity stomp-rockers full of heart, which sing out with a youthful anxiety tempered by the sweetest melodies. Several of which pepper this set: Be Your Baby, Friendly Ghost, Tila and I, Gay Human Bones and Cloud Pleaser are all short-and-sweet numbers possessing no shortage of memorable hooks. Like Black Lips and The Strange Boys, their songs’ roots snake deep within instant-fix foundations laid by The Beatles and, later, the Ramones; at an intersection of pure pop and raucously infectious punk. There’s nothing challenging about their output, at all – and that’s precisely why it’s so great.

Quite who Harlem can hope to appeal to, in the UK at least, when music fans here are evidently besotted with sci-fi nonsense one minute and cleverly articulated kitchen-sink dramas the next is anyone’s guess. Best to quit the questioning, though, and get down with the rollicking jams they’re kicking out regardless of how many people are listening. 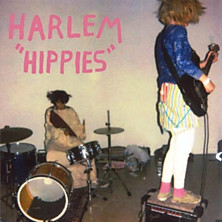