McFly Above the Noise Review

They’re not just back, but have guaranteed themselves a future.

Frankly, it's a miracle this album exists at all. After all, all the usual credibility-gap closers – numerous Beatlesque albums, gigging at the Barfly, releasing on an indie label – still haven't quite shifted the perception of McFly as Busted Club Juniors, while their absence has seen the surprise renaissance of boybands like they used to be. Clearly, then, to stand any hope at all, they need to have even more of a plan B than, well, Plan B did.

In fairness, the crazed despair and raised eyebrows that the recent singles have been greeted with on YouTube would suggest that that's exactly what they've got. But, intriguingly, even the breathtaking Bad Romance homagery of Party Girl and perfectly serviceable of-the-moment pop of Shine a Light are little preparation for the delights in store here. Dallas Austin may have seemed an unlikely production choice, but he deploys the same sci-fi surefootedness he brought to TLC's FanMail, along with – read on, purists, and despair – a veritable truckload of synths. And, perhaps just as surprisingly, the foursome all rise to the challenge remarkably.

Harry and Dougie, for instance, cope manfully with hurling their rhythm section rollicks from the dancehall to the dancefloor, what with Take Me There being borderline Balearica and Nowhere Left to Run sitting but a tiny tweak from all manner of housey goodness. Danny's familiar rasp, hormonally charged at the best of times, comes positively alive in such lusty surroundings, especially on I Need a Woman's alone-in-bed musings. Sauce! Tom, meanwhile, is a revelation, drifting through in a fabulously lost falsetto, and those who doubted he could convincingly tackle an RnB slow jam – pretty much everyone, probably – should ready themselves for the outright shock and awe of the magnificent I'll Be Your Man.

Alright, so they do lose their way somewhat towards the end, but thankfully before that we've been treated to the likes of End of the World, which flicks audaciously between ultra-futurist reveries and a retread of Eve of the War in a Queenly guitar fashion, and standout iF U C Kate, which takes similarly royal cues to become a flawless facsimile of Revolution-era Prince. It's the most radical break we can remember at this stage of a band's career since Everything but the Girl's jaunt into jungle, and one that confirms that McFly are not only conclusively back, but they might just have guaranteed themselves a future. 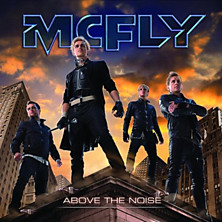