Truffaz remains one of the most consistently creative trumpeters around.

There was a generation or two of trumpeters who picked up ideas from the meteoric musical trajectory of Miles Davis and developed them after Miles himself had moved on.

Palle Mikkelborg and Enrico Rava are good examples, but the Swiss-born Frenchman Érik Truffaz is one of the most consistently creative. He just can’t help sounding beautiful and lyrical, whatever the setting.

A good example here is his work on the slightly grungy sound of vocalist Anna Aaron’s song Blue Movie, which has a delightful, whimsical trumpet solo with Harmon mute that could have sprung out of any Davis recording from the 50s or 60s.

As on many recent Truffaz discs, regular partners join the trumpeter: namely Marcello Giuliani on bass and drummer Marc Erbetta. They understand perfectly his desire to connect to the worlds of hip hop and dance music, and leave him free to weave his Miles-ean patterns with plenty of space.

Yet, Corboz can inhabit orthodox jazz territory too, producing a heartfelt Rhodes solo on La Luna Mentirosa that matches his leader’s lyricism and introspection.

Aaron guests on three tracks, but the heart of this disc is the intense connection between the members of Truffaz’s quartet. The 11-minute Revolution of Time is a classic, looking back to the great days of the jazz tradition of the 50s and 60s, but somehow utterly contemporary at the same time.

Suffused with Truffaz’s beautiful tone, and with acoustic rhythm section at an almost unbearably slow tempo, the closer is a subtle masterpiece. 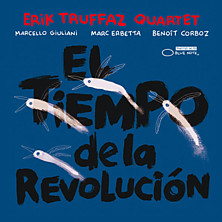