Makes good on the promise of its undeniably appetising title.

Michael Franti is a gift to the Wikipedia-editing pedant. Born to an Irish-German-French mother and part African-American, part Native American father, before being adopted at birth by a Finnish American couple based in Oakland, California, he's spent his 45 years forging a career as perhaps the planet's only poet-cum-peace campaigner-cum-philosopher who concurrently fronts a six-piece hip-hop-reggae fusion outfit while extolling the virtues of a vegan lifestyle and strolling through life, wherever possible, without wearing any shoes.

Sadly, the wisdom Franti imparts on his seventh album with Spearhead – said fusion outfit and his musical outlet since 1994 – is less insightful than that potted biography might suggest. Written while recovering from surgery to remove a life-threatening ruptured appendix, The Sound of Sunshine is an inexorably optimistic collection whose heartfelt messages of carpe diem positivity and companionship are frequently undercut by the clichéd ways in which they're conveyed. This is the kind of record in which a paramour is "perfect just the way they are", cities are places where there are "million other people but still you just feel alone", and the less enticing idiosyncrasies of the human race are summarised thus: "It's a crazy world, a mixed up world, involving politics and the underworld."

Fortunately, Spearhead's music is often sufficiently infectious to buttress Franti's trite lyrics. The Sound of Sunshine features plenty of sprightly-as-a-rock-climber pop-reggae, sometimes rapped but mostly sung (and sung with soul) by Franti, but its 12 tracks don't want for variety. In fact, the album's most entertaining moments are actually its most unexpected: The Thing That Helps Me Get Through with its guitar riff that wouldn't disgrace Keith Richards' gnarly old fingers, the U2 stylings of I'll Be Waiting, a couple of dancehall party cuts, Shake It and Say Hey (I Love You), that are as difficult to resist as one last glass of rum punch. Two or three songs slip into Jack Johnson-ish blandness, but for the most part The Sound of Sunshine makes good on the promise of its undeniably appetising title. 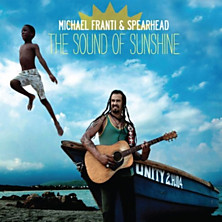