Kelly Clarkson All I Ever Wanted Review

It's difficult to sit on the fence when it comes to Multi-platinum pop rock Princess Kelly Clarkson. Her distinctive, raspy, angst-ridden vocal is akin to the Anastasias and Pinks of the pop world. With lungs of steel and a ballsy delivery, her style is rock-tinged pop. Her fourth album won't disappoint hardcore fans but is unlikely to garner new listeners.

Opening with catchy, punchy, full-throttle hit, My Life Would Suck Without You, the first ever American Idol winner sets the tone with her signature vocal acrobatics. The collaboration with infamous producers/songwriters, Dr. Luke (Britney Spears, Avril Lavigne) and Max Martin (Backstreet Boys, *NYSNC) was clearly a wise move.

Moving on to I Do Not Hook Up, Clarkson comes over all self-righteous as she chastises her lover for getting high. Still, it's good to know this role model hasn't taken a page out of Amy Winehouse's self-destructive book.

The Sam Watters-produced Cry gleams from the rest of the pack with its beautiful guitar riffs and gushing melodies. Clarkson is the cherry on the cake of this future hit. This more mature sound suits Kelly, as does the sophisticated album title track: a grown up move for the American star.

A giant mistake is made when Clarkson delves in to punk/thrash territory on Whyyawannabringmedown- purists will despair and KC fans will be perplexed. Equally as annoying, yet utterly different is I Want You - a mindless, cartoonish pop fantasy that does nothing for Clarkson's vocal range.

The cash cow that is Kelly Clarkson finishes with a bang, however, as The Day We Fell Apart cements exactly why this young Texan has sold so many records. This brilliant slice of pop is much like its performer: brimming with all the right ingredients needed to be a hit. What it all boils down to, however, is taste. 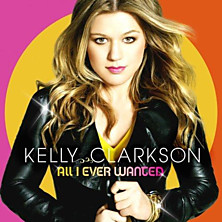