Classic Afrobeat reissue from one of the giants of African music. Serious funk and...

Fela Kuti's life and times make the average rock star's antics look pretty tame. He was persecuted, hounded and beaten by the Nigerian authorities for over thirty years. A genuine hero of the people, he attacked the corrupt regimes that dogged the country despite increasingly brutal attempts to keep him quiet. He invented a form of music of his own. He married over 20 women in one go (he divorced them all in one go in 1986). He was always controversial, arrogant, outspoken and innovative. Beat that Liam Gallagher!

This is Afro-beat, the genre he invented. If you've never heard it before you are in for a treat.

Kuti's output is vast, over fifty albums. Wrasse records have just begun a series of reissues of a lot of it. This double CD brings together two of his very best. Recorded twenty seven years ago, it still sounds fresh, confident and sophisticated.

Every one of the five tracks here is compelling, each with a different rhythm and feel. "Expensive Shit" tells the tale of when the Nigeria police accused him of smuggling. They made him excrete to check if there was anything in it (there wasn't). It's sarcastic, hilarious and righteously angry. "Water No Get Enemy" is even better with a great latin tinged sax/chorus riff. "He Miss Road" adds some spooky echo and keyboards. "Monday Morning in Lagos" is jerky, rythmicallycomplex and laid back. It sounds like a town struggling to get into work.

Indispensable stuff from a giant of African music, and highly recommended. 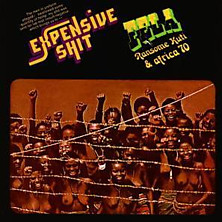