By all accounts, the life of Oregon songwriter Tim Hardin was one plagued by melancholy and, more crucially, a crippling double-whammy of stage fright and heroin addiction. It ended in 1980 after the latter became too much.

As many newcomers to his music will discover with this occasionally outstanding collection of covers, his songs work best when playing on the frisson between the delicacy of his sentiment and the very real and troubled legacy he left behind.

By their very nature, some artists are more suited to Hardin’s unique brand of dented tranquillity, but the best results on Full Time Hobby’s new compilation come from those with a sound far removed from the source material.

The biggest draws here for the casual listener will be Smoke Fairies’ sullen refurbishment of If I Were a Carpenter (which was a top 10 hit for Bobby Darin in 1966) and Mark Lanegan’s equally gruff rendering of Red Balloon. But the real treats are deeper below the surface.

Okkervil River and The Sand Band probably reflect a Hardin influence on their own material, but it doesn’t mean that their contributions aren’t exquisitely judged – especially the heady fuzz of Okkervil River’s It’ll Never Happen Again.

Not absolutely everything works, but so much of it does that Reason to Believe performs a neat trick: it makes the listener want to discover exactly where these songs came from and why Hardin wasn’t more appreciated in his lifetime.

Hardin himself was fond of the occasional cover version (and reading the Wikipedia list of artists that have covered If I Were a Carpenter is quite staggering – especially when you go past Johnny Cash and reach Leonard Nimoy), so it’s hard to imagine him disapproving of this variously intimate, bold and engaging collection. 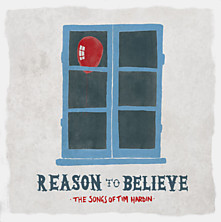