Now, with Natalie not ready to begin recording again, Emily and Martie have formed Court Yard Hounds, and the pair’s debut album proffers some proof that the Chicks are greater than the sum of their parts.

The two always gave Natalie the perfect setting on their recordings: their backing vocals were entirely complementary, often taking the edge off quite a strident lead voice. Their instruments were always to the fore, keeping them sounding authentic but also absolutely of their time.

But while Court Yard Hounds is a well-packaged and produced collection, its songs seem rather ordinary compared to Chicks material. Emily and Martie are co-producers, and one can imagine the strategy: let’s show that we’re more than just banjo- and fiddle-playing backing singers. Indeed, those instruments make only cursory appearances, so the sound that should set the pair apart is lost. Their voices might not be as distinctive as Natalie’s, but they certainly don’t lack personality. The problem is the songs, almost all written by Emily, which simply don’t give them anything to work on; thus, everything ends up sounding akin to watered-down Shawn Colvin. Things begin to click a little when Jakob Dylan joins Emily on See You in the Spring, but it’s the performance not the song that attracts.

I would love to have heard the result of the pair being produced by someone who could have knocked their songs into shape; who could have thrown out a few and replaced them with three or four non-originals. There’s a huge following for the Chicks, and not just for Natalie, so there’s a lot of goodwill behind whatever these two get up to. And they could do it, too – they just need a firm hand.

As when all’s said and done, we need people like Court Yard Hounds to be good if country music is to roll around once again to delivering the fresh and innovative music it is capable of. 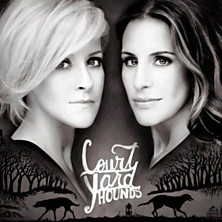