So assured is Nelson that it’s impossible not to feel the love.

Having long strayed into the mainstream amid duets with everyone from Julio Iglesias to Wyclef Jean and Jon Bon Jovi, Willie Nelson has diversified into so many different musical territories – becoming an iconic figure in the process – that it’s easy to forget that his proud, primary heritage lies deep in the heart of country music. Listening to this not unattractive, but rather desultory album, it’s also easy to overlook the pivotal role he played in the great country wars when Willie and Waylon and Kris Kristofferson dramatically changed the image of Nashville.

Not that there’s much of the outlaw left in the 76-year-old Willie by the sound of this, even with the redoubtable T-Bone Burnett at the production desk. Initially exclusively on sale for a month in Starbucks outlets, it’s a relatively low-key effort, with Willie doling a mixture of classics like Dark as a Dungeon, Pistol Packin’ Mama, Freight Train Boogie and Satisfied Mind alongside lesser-known material in characteristically lugubrious style. Burnett surrounds him with a low-key old-timey sound built around fiddle, banjo, bass, guitar and pedal steel.

It’s a long way from Blue Eyes Crying in the Rain, On the Road Again and Crazy, and has none of the sparing tension of his finest works like Red Headed Stranger. But the great news is that his greatest asset – that wonderfully persuasive and uniquely distinctive voice – remains perfectly intact, and that alone is cause enough to make it an album to be cherished. And despite the lack of thrills and spills, Burnett does provide a sympathetic backdrop that is firmly in the country tradition, albeit one from a very old school. Guitarist Buddy Miller, banjo picker Riley Baugus and fiddle player Stuart Duncan may even be the true stars on an album that conjures such a mood of authenticity it sometimes sounds like it has come straight out of the Grand Ole Opry circa 1963. Which was probably Burnett’s intention.

Hardly revelatory then, but Nelson delivers hardy material like traditional Satan Your Kingdom Must Come Down and I Am a Pilgrim with such wizened assurance, it’s impossible not to feel the love. 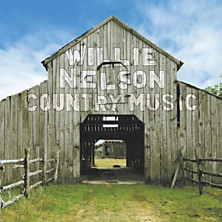