Sweet 7 doesn’t sell the Sugababes as individuals or as a brand.

Apparently, there’s no such thing as bad publicity. But try telling that to the Sugababes, who faced a cruel backlash following the departure last year of founding member Keisha Buchanan and the appointment of Eurovision star Jade Ewen. With postponed seventh album, Sweet 7, finally available, it’s interesting to see if the group’s charm can transcend their personnel issues.

Sixth album Catfights and Spotlights dangerously, but admirably, shied away from the electro explosion with outstanding results. Unfortunately, its results in a commercial context didn’t correlate, which may explain this release’s total 180-degree turn and hopping aboard the RedOne bandwagon, one that’s served Lady Gaga so well. Unfortunately, the upshot is style over substance in a display of nonspecific electro-pop as clichéd as the aforementioned adage itself.

It’s hard to imagine, even if Buchanan were still present, that Sweet 7 would sound any less generic. It’s not her departure that’s to blame for the lack of identity here; it’s the serious vocoder abuse, uninspired production and the stream of Americanisms. And any opportunities for Ewen to make her mark are few and far between, her gale-force chops heavily obscured by such torrential overproduction. It’s only because it hangs doggedly onto the Sugababes brand that it’s not entirely devoid of anonymity.

There are certainly a few glimmers of brilliance – Wear My Kiss boasts a hook evocative of the instantaneous splendour of Hole in the Head, while Amelle Berrabah’s unashamed attitude saves She’s a Mess. Elsewhere, there are reminders that any venture the ‘Babes take into ballad territory is largely triumphant, via the unpretentious Little Miss Perfect and the Ryan Tedder-esque Crash and Burn.

But chiefly, Sweet 7 doesn’t sell the Sugababes as individuals or as a brand. Perhaps it’s unfair to expect great things at this stage – a chance to gel and re-establish their ideals might bear a far more appealing fruit in the form of album eight. It’s just a shame that in such an overt attempt to make an album that’s so intrinsically of the moment, the Sugababes’ own moment seems to have sadly passed. 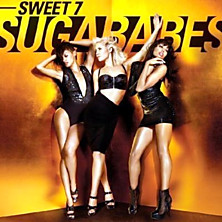