Glaswegian sound rig and production house Mungo's Hi Fi have built for themselves a reputation for refreshingly open-minded reggae-based excursions, utilising microphone talent from around the world. This, their third album (and their first for the single-prolific Scotch Bonnet imprint) goes further than previous sets to capture the flavour of their shows, assembling their youngest, most diverse cast of helpers yet.

Key to their music is late-80s dancehall – reminiscent of London’s Unity label as captured on Honest Jon's 2003 compilation, Watch How the People Dancing. But this outfit assimilates everything from industrialised ska to dubstep, building bruising yet infectiously danceable cyber-rhythms before mixing them live.

Forward Ever is more digital-sounding than 2008's Sound System Champions (on ska label Rockers Revolt, which unsurprisingly featured horns). At the same time, there are a lot more crowd-pleasing classic backings and nods to the past. There's the unmistakable voice of the late, great Sugar Minott on one of several takes on the Heavenless rhythm (Scrubadub Style) and a haunting remix of Henry & Louis featuring Pacey's cover of Errol Dunkley's A Little Way Different.

Mungo's mainstay (and original Unity artist) Kenny Knots returns on the bowel-bothering Bogle base for Rasta declaration Gimme Gimme, while Lee Perry's son Omar supplies his raw deejay style for Dem No Like It. The standout number, however, comes from the entrancing Supercat and Nicodemus heir Mr Williamz – he explains how technology has changed the business, over the Mad Mad rhythm, on Computer Age.

As you'd expect from the concept, each tune maintains the mood as the record moves forward. Less song-based and organic than Sound System Champions, Forward Ever, like a real Mungo’s Hi Fi dance, is one continuous whole. 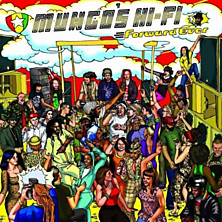