Every bit as exploratory and expansive as fans old and new have come to expect.

Rarely ones to let self-consciousness stand in the way of indulgence, Mew’s follow-up to their much-acclaimed album of 2007, And the Glass Handed Kites, is every bit as exploratory and expansive as fans old and new have come to expect.

Of course, such an approach to songwriting has been known to divide critics – but so far the Danish group has avoided negativity in their pursuit of progressive sounds beyond the reach of many an indie band. While lumped in with said crowd by lazy ears, there’s evidence enough on this fifth studio album that Mew deserve to be categorised alongside some of the more extraordinary outfits pushing beyond boundaries: Radiohead and Muse are stylistic bedfellows, although the Danes are rather more restrained of bombast.

Unlike its immediate predecessor, the mood of No More Stories… is fairly upbeat, a characteristic that suits its summertime release date well – whereas previously the (now) trio could paint a picture of introspection with broad brush strokes of melancholy, here gossamer synths and sky-scraping vocals combine to evoke the intoxicating emotion of M83 while simultaneously layering swathes of affecting instrumentation reminiscent of Swedish post-rockers Jeniferever at their best.

If that does sound a little morose to you, worry not: the jaunty beats of Beach conjure comparisons to Phoenix, and the shimmer-riffs of Hawaii are immensely uplifting. Those titles alone should tell you something of the mood of this record – it’s a confidently crafted collection that wallows in sentimentality only when balance will be struck minutes later by a composition sure to get the toes tapping.

The album’s centrepiece is Cartoons and Macrame Wounds, sitting at track seven of 14. A stunningly realised, soul-stirring arrangement that sets the skin tingling and the heart fluttering, it’s the sort of song that would usually sit at the end of a record, bringing the curtain down with a truly end-credits-epic flourish; that it’s followed by pieces of even greater beauty says much about the abilities of these musicians. The actual closer, Reprise, is a work of utmost elegance, a wobbling riff underpinning sumptuous electronic tones. It’s a great end to a great album. 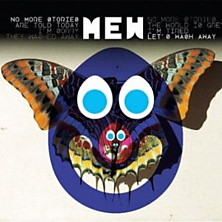