This is a beautifully-crafted album, drenched in despair and bitterness. It's like...

The last time The Wedding Present delivered an album, Peter Andre's "Mysterious Girl" was topping the charts for the first time. Happily, this is a comeback worth talking about.

During the nine years that followed the release of critically-acclaimed Saturnalia, frontman David Gedge swapped the disillusionment of youth for his pipe and slippers, forming ambient outfit Cinerama with long-term partner Sally Murrell. And that, it seemed, was that.

But in 2002, the couple's 14-year relationship came to an end and the storm clouds began to gather again. As a result he got his former band back together and recorded "Take Fountain", a beautifully-crafted album, drenched in despair and bitterness. It's like he's never been away.

Although not as immediate or abrasive as George Best or Bizarro, Gedge is undoubtedly back to top form and ready to challenge Morrissey for the King of Malcontent crown. The irony of the Valentine's Day release will not have been lost on Mozza.

First single "Interstate 5" sets the tone nicely. Afficianados will note that soaring, eight-minute epics are not standard Wedding Present fare, but you dare not take your ears off this for a second. 'I need to stay near, in case you suddenly remember that I'm alive,' he groans, before concluding: 'You seemed quite sincere but will you recognise my face this time next year?'

Swathes of humour swirl around this album like an angry fog. Take "Mars Sparkles Down On Me", when our David is asked to meet his ex-girlfriend's new beau. 'How can I just shake his hand when it's been all over your skin?' he wails.

Take Fountain does include trademark Wedding Present features - the jangly hook of "Always The Quiet Ones", the growling bassline of "It's For You" - but overall the sound has matured into a more thoughtful, less frenetic affair. "Larry's" is simply the saddest song you'll hear all year.

It's Gedge's acerbic wit that lifts him head and shoulders above his peers - as illustrated in "I'm From Further North Than You". Recalling shared walks in the sea and the purchase of 'weird pornography' with his former lover, he concedes: 'I admit we had some memorable days...but just not very many.' Genius. 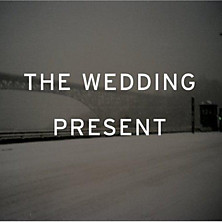