Labelle Back To Now Review

Back To Now is one of the best soul albums you'll hear all year, possibly this decade?

This is a comeback album with its dignity completely intact. 33 years on since they split in 1976, Back To Now sounds infinitely better than had they recorded some over-produced disco confection in 1978. With help from Gamble and Huff and Lenny Kravitz, the formidable trio – Nona Hendryx, Sarh Dash and Patti Labelle – have created a memorable album.

''Ladies, there comes a time in your life when you got to do some things you didn't think you’d have to do'' Labelle shouts at the start of the auto-tune driven Rollout with – wait for it – Wyclef Jean involved. However, the album's only real concession to the hit parade has paid off in the states, where it has indeed become a smash.

Elsewhere, it is an assured work that brings together their years of experience, and picks up as if they'd never left. Everything is in the right measure. They revisit their early 70s rock incarnation with their cover of Mother's Finest's Truth Will Set You Free and show how no-one quite did dirty like they did. In Hendryx's love song to the group, Without You In My Life, we have the showstopping power ballad, orchestrated by Gamble and Huff. Intensity and soulfulness are here as standard.

Gamble and Huff also contribute to the album's standout, the growling, swampy Tears For The World, an update of the civil rights soul of the late 60s and early 70s. Dear Rosa, the group's tribute to Rosa Parks follows fittingly. What squares the circle is a version of Miss Otis Regrets recorded in the early 70s. It is produced by their original manager Kit Lambert and features none other than Keith Moon on drums.

Adding a live version of Lady Marmalade at the end to placate UK audiences, Back To Now is one of the best soul albums you'll hear all year, possibly this decade? 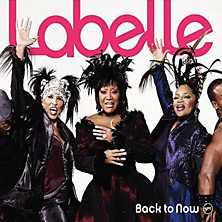