Coleman remains a singular force in the jazz world.

Although the Chicago saxophonist has no major label to ensure him front page promo, his return to the world of CD releases after a near four-year hiatus is something of an event, such is his reputation.

Coleman has exerted a substantial influence on the jazz world since his emergence in the early 80s and the M-Base sound that he largely pioneered – rhythm organised in uneven or shifting meters; aggressively staccato melodies; agitated song structures – had a decisive impact on adventurous younger musicians such as Robert Mitchell, Malik Mezzadri and, latterly, Vijay Iyer. Coleman is one of a select group of jazz musicians who have both a composing and improvising style that can largely be recognised from a single bar of music, and this latest release is no exception to that rule.

The counterpoint is still inventively prickly. The pulse of most of the songs still has a deliciously off-centre feel, as if the downbeat was moving around, but without reducing the internal cohesion of the rhythm section or its combustible swing. Of greater importance is the character of Coleman’s group, Five Elements. Trumpeter Jonathan Finlayson and trombonist Tim Albright are both longstanding associates and they are customarily incisive, while the new drums and bass team of Tyshawn Sorey and Thomas Morgan strike an impressive blend of propulsion and restraint. But the key member of the line-up is arguably vocalist Jen Shyu. She has a unique tone, one that is both masculine and feminine, sliding between contralto and soprano, to bring as much ardour as grace to arrangements. For the most part, she is deployed either as an accompanying piano or a fourth horn, often doubling sax lines, the effect of which is to create a timbral richness without being overly dense.

Indeed, compared to a classic Coleman work like 1997’s Genesis, there is a slightly more airy, gliding quality in the melodic lines even though the underlying rhythms are resolutely tough. Undeniably introspective, this is nonetheless music with an extrovert muscularity and stark physicality that would make it hard to ignore in performance. 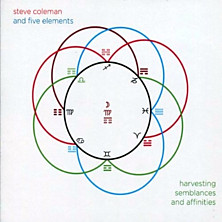