Playwright Noel Coward once quipped: “Television is for appearing on, not looking at.” He’s seemingly not alone in that belief, either. You might think that pop stars would prefer to take a break from being gawped at between tours, but many of them have been eager to make their mark on more TV shows than just Top of the Pops.

As a result, over the years we’ve been treated to the sight of UK garage stars hanging out with time-travelling fugitives, legendary pop chameleons making fun of "pug-faced" losers, rock ‘n’ roll royalty turned into children’s cartoons and boyband heart-throbs hanging out in The Queen Vic. Here’s a selection of the most memorable cameos made by musicians in some of the BBC’s flagship programmes.

1. Mike Skinner in Doctor Who

You know, I had quite forgotten that Mike Skinner was in the opening seconds of 'The Time of Angels.'

Many a pop star has blagged a guest spot on the world's favourite time-travelling epic - Kylie Minogue had a leading role in the 2007 Doctor Who Christmas special and Foxes turned up in Mummy on the Orient Express to sing a jazzy cover of Queen’s Don’t Stop Me Now - but The Streets star Mike Skinner’s brief turn might be the best Doctor Who cameo of them all. Fans who remember 2010’s episode The Time of Angels will recall his appearance as a dazed security guard who - spoilers - falls victim to Dr River Song and her hallucinogenic lipstick: he’s so bamboozled by River’s smooch that he completely fails to stop her breaking onto a spaceship.

Which in turn prompted this excellent joke:

Mike Skinner's character wasn't identified, was he? A clear case of... Where The Streets Have No Name!!!

Given the fashionable circles that media darlings Eddie and Patsy moved in, it always made sense that they’d frequently be out schmoozing celebrities, spotted rubbing trendy shoulders with everyone from Lulu and Marianne Faithfull to Suzi Quatro and Debbie Harry of Blondie (who even sang a cover of the Absolutely Fabulous theme tune This Wheel’s On Fire, for an episode that also featured Rufus Wainwright). In the clip above, Spice Girl Emma Bunton - Edina's PR client - offers Saffy's favourite film actress Jeanne Durand singing lessons that don't go quite according to plan.

One of the finest cameos in Ricky Gervais’s fame-skewering sitcom Extras came courtesy of Coldplay’s Chris Martin, who played a monstrous version of himself as a philanthropic charlatan. “Can we get on with this?” he asked while filming a charitable appeal. “I’ve got to do Aids and Alzheimer's and landmines this afternoon, and I wanna get back for Deal Or No Deal. Plus, Gwyneth’s making drumsticks.”

But he was surpassed by David Bowie’s majestic appearance in the show’s second series, when Gervais’s Andy Millman approaches the singer in a bar to discuss his critically panned sitcom. Rather than dole out sympathy, Bowie performs an off-the-cuff song inspired by Andy’s plight. “See his pug-nosed face,” he croons, leading the bar’s punters in a sing-along rendition of his hilariously harsh ditty, Little Fat Man.

4. Roger Daltrey in The Mighty Boosh

It never seemed a huge shock when bands such as Razorlight popped up on The Mighty Boosh - after all, its writers and co-stars Noel Fielding and Julian Barratt became as beloved a pair in the pages of NME as many of the Camden indie bands they hung out with - but spotting Roger Daltrey of The Who on the surreal comedy show was a genuine surprise. That they convinced him to appear pushing a hoover around in his old 70s fringed suede jacket was even odder, although apparently it was about time he joined in with some hard work: according to other characters from the same episode, Daltrey was one of the “selfish men” who cleared off as soon as Woodstock finished, refusing to help them clean up the mess.

5. Motörhead in The Young Ones 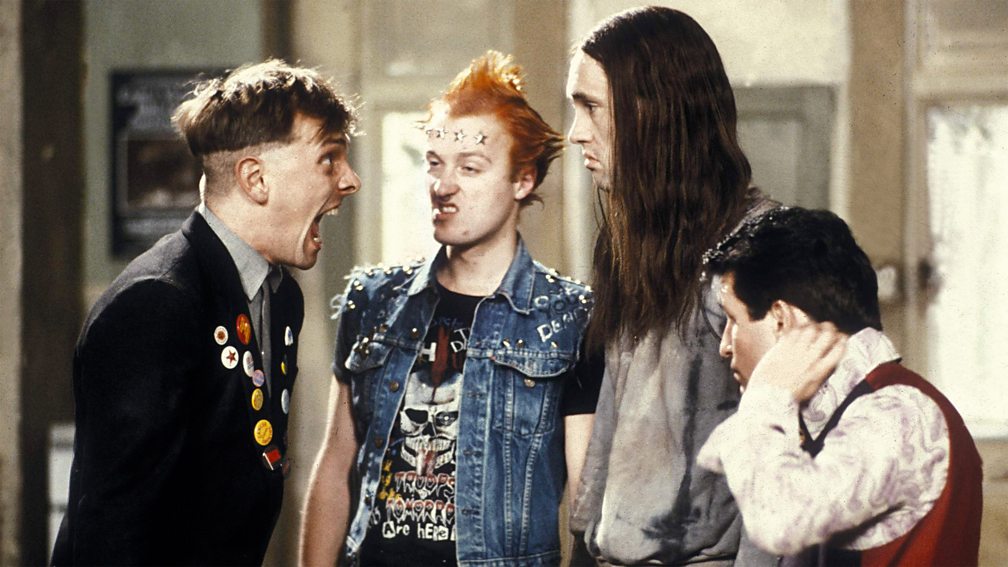 The Young Ones’ theme tune provided a clue to its anarchic philosophy, as Cliff Richard’s jolly original was given a warped, tuneless (but spirited) overhaul by the show’s motley cast. Many of its musical guests tended to follow suit, with the likes of The Damned, Madness, Dexys Midnight Runners and post-punk band Rip Rig + Panic invited to perform on set. Best of all, perhaps, were Motörhead, as Lemmy and co helped Rik, Vyv, Mike and Neil get to University Challenge with a typically brutal rendition of their signature song, Ace of Spades.

Some pop stars, you suspect, are happy to remain safely in the background when straying out of music and into TV drama, scared of doing anything too wacky lest they ruin their cool image. Not Toyah Willcox, though. The It’s A Mystery singer followed a 2009 appearance in medical drama Casualty with a bizarre role in daytime drama Doctors; in 2015’s appropriately titled Afternoon of the Living Dead, she helped the employees of The Mill Health Centre work on their team-building skills by teaching them how to survive a zombie invasion. Yep, it’s as strange as it sounds.

7. Jamelia in Death In Paradise

Jamelia had garnered impressive record sales and a handful of industry gongs including four MOBO awards before she released her final album, Walk With Me, in 2006. The LP didn’t sell as well as its predecessor, 2003’s Thank You, and she parted ways with her record label Parlophone shortly after. Her character in the comedy crime series Death In Paradise - starring Ben Miller as a detective on a Carribean island - had a far grimmer experience of the music industry, though. Jamelia played Aimee, a singer who performs on a party boat but dies midway through her set, sparking an investigation into her murder. The method of death? A poisoned shot of rum.

EastEnders often gives celebrities prominent roles on its screen, such as Radio 1 Breakfast Show host Nick Grimshaw (above) who could be spotted wheeling a cleaning cart around the cafe in 2014, or then-Mayor of London Boris Johnson stopping in at the Queen Vic for a catch-up with fierce matriarch and landlady Peggy Mitchell. But it often delights in hiding big stars in the background, too. In 1995, Robbie Williams - at that point, still known as the bad boy of Take That and yet to become a solo superstar - made a blink-and-you’ll-miss it appearance in the soap, lurking in the background of the show’s famous pub and using its payphone.

9. Sting in Life's Too Short

For the follow-up to Extras, Life’s Too Short, Ricky Gervais and Stephen Merchant dipped into their contacts book once more, persuading the likes of Johnny Depp and Helena Bonham Carter to share the screen with leading man Warwick Davies. In one set-piece, Davies - struggling for both meatier roles and money - attends a charity ball thrown by Sting, who tries to persuade him to sponsor a child in India. Cue a toe-curlingly awkward scene filled with embarrassed silences and insensitive questions as Davies tries to duck out of stumping up the cash. And then it gets even more uncomfortable when the former Police star pressures him into a bidding war in a celebrity auction, until Davies eventually lashes out at the “coconut-headed” singer.

10. Elton John in Bob the Builder

Chart historians will remember that Bob the Builder is a music star in his own right: the theme tune from the cartoon series, Can We Fix It? (above), claimed the Christmas Number One spot back in 2000, triumphing over Eminem and Westlife in the process. But for 2001’s special episode A Christmas to Remember, Bob needed a little help from a musical pal when a local Christmas concert was jeopardised by the withdrawal of rocker Lenny Lazenby (voiced by Chris Evans) with laryngitis. Luckily, he was replaced by aspiring singer-songwriter John (or as we know him, Elton John), who saved the day with a performance of Crocodile Rock. Oh, and keep an eye out for Slade’s Noddy Holder as glam roadie Banger, too.