From Star Wars to Harry Potter, why John Williams is a soundtrack Jedi

By Alex Marshall, with photos by Mark Allan 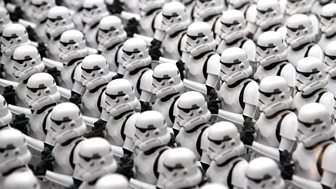 On 20 July, the BBC Proms held a special tribute to John Williams, the man behind practically every film soundtrack you love. From his Jaws theme - the most terrifying two notes in musical history - to his instantly recognisable music from Star Wars, Indiana Jones and Harry Potter, he's composed dozens of pieces that are arguably as powerful as anything by Stravinsky or Mozart.

If you wanted to feel some of that power, you only had to talk to the thousands of people queuing to get in, or those working and performing at the concert. Each one had a story about just why John Williams's music is so important to them. It can make you a fortune busking, it can be the reason you started playing an instrument, it can even be the music you want played at your wedding.

The Prom was performed by the BBC Concert Orchestra conducted by Keith Lockhart.

Watch the best bits from the Celebrating John Williams Prom 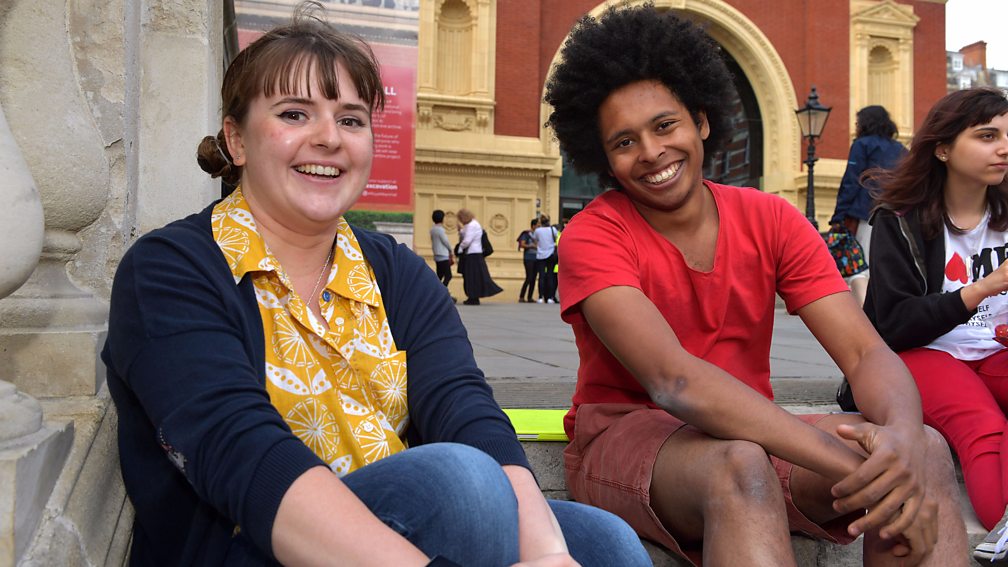 Issy: "John Williams' soundtracks are so recognisable, you know it's him from the first four notes. His music was probably my gateway into classical music - like the Harry Potter music, the escapism, the magic. It’s such a wonderful universe he creates. I play the cello now and he’s probably to blame for it."

Daniel: "I'm a big choral music fan but I don't play instruments, so my access to the world of orchestral music was through his soundtracks. I think John Williams makes that music so accessible to people. I really want them to play the Cantina Band theme from Star Wars tonight. It's just such a fun song, and unlike anything else John Williams has done." [Daniel got his wish, the BBC Concert Orchestra played it as a surprise encore] 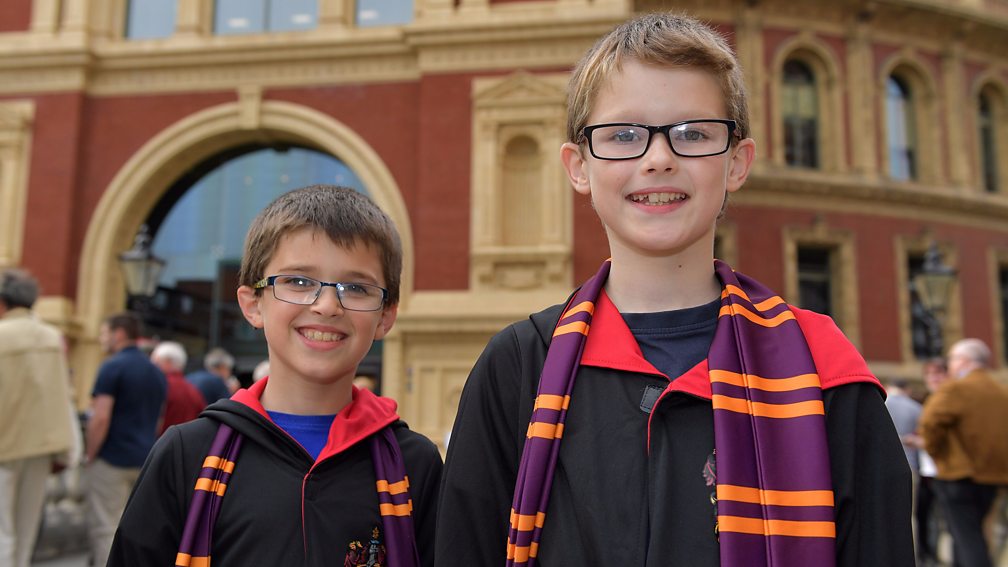 "I play the piano. My favourite thing to play is Harry Potter, Hedwig's Theme. I got the music for Christmas. I also have a Harry Potter wand, the glasses, the costume, a poster of when it was made, and I've watched all the films and nearly read all the books. I'm really excited for tonight." 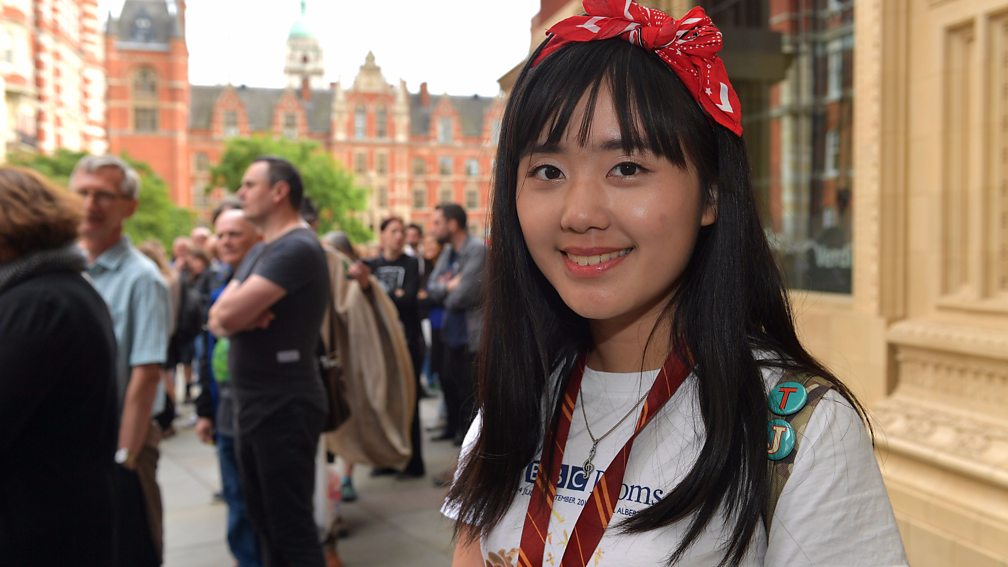 "I'm Malaysian born and bred. I started playing piano when I was five and the violin when I was eight. I came to know about the Proms when I first heard Jerusalem when I was 14. I fell in love with it immediately and I always wanted to come someday to hear it at the Last Night. When you're young you can only imagine, 'Oh, how good it'd be if I was there.' And many years later it came true.

"I've been to lots of Proms now, but tonight's very important to me. John Williams is one of my favourite film composers, especially Star Wars and Superman and Harry Potter. I rushed here at 10:30am as usual to get a ticket. I always come at the same time. On the first night of the Proms this year, my ticket number was 22. Two days ago [for a Shostakovich Prom] it was 18. Today it was 76! That shows you the power of John Williams." 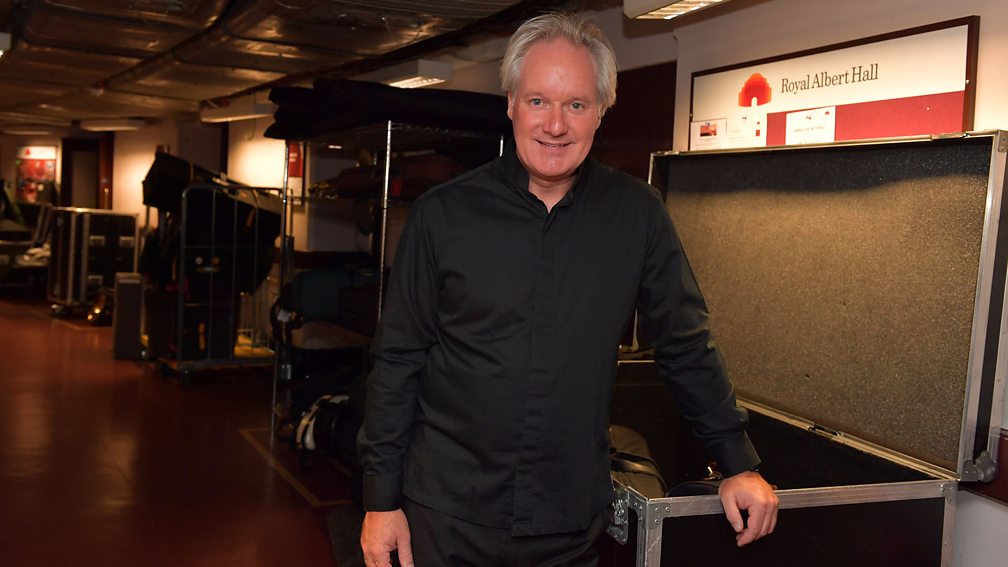 "We always enjoy playing John Williams's music as it's a fantastic orchestral soundscape to be part of. It's big stuff. There is nothing quite like when you're in a full orchestra going for it, and I think that's why many of us wanted to be in an orchestra in the first place. Sometimes we do dress up [when playing], but the problem is the compositions come so fast, so you have to feel comfortable if you dress up as a wizard that you then might have to then play a Memoirs of a Geisha piece. Imagine if you dressed up as a Stormtrooper and then you're playing something from Amistad." 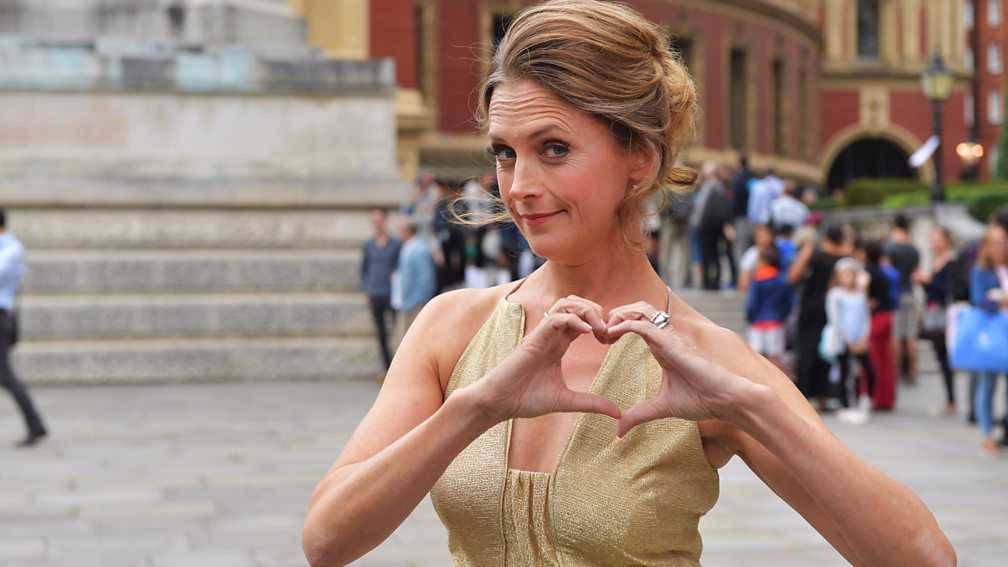 "I'm recording the introduction for tonight's show. The wind's been a little problem [messing up my hair]. Occasionally, it's the people in the background, looking down the camera saying hello to their mum, but I love them all because they're all brilliant and charming and bonkers. Tonight, I'm really looking forward to hearing the piece from Munich. That's a really depressing choice, isn't it? I love the film - I know it was very controversial - but it was very powerful, and the music is too." 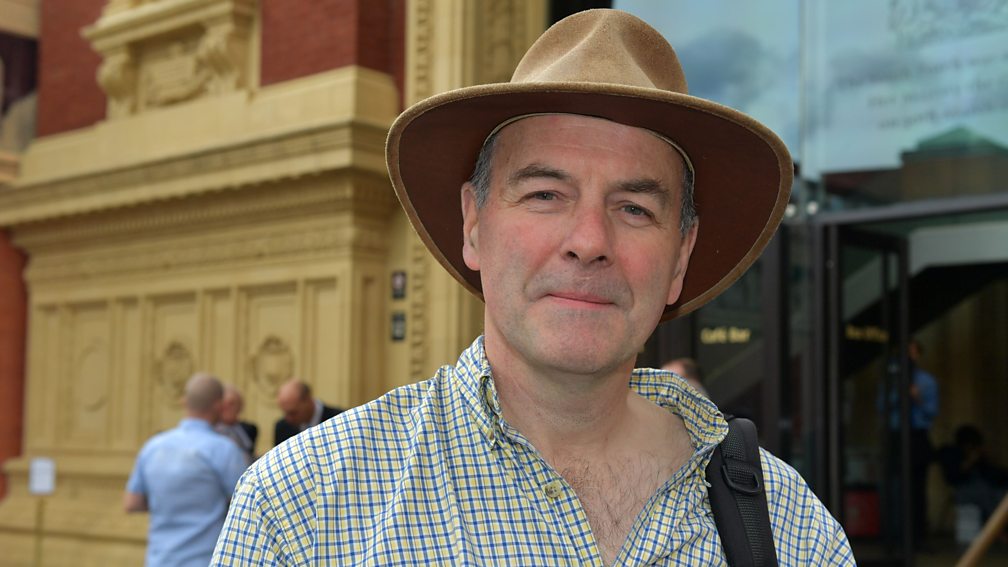 "I haven't come as Indiana Jones, no! It's just a sunhat, and it's crumpled. Why have I come? Because his music's great. Jaws is actually my favourite, a great piece of art. I play the piano - a bit of baroque - but I've got an injured hand so I don't so much anymore. I cut the end of my finger off with the lawnmower. It could have been a whip injury if I was Indiana Jones, but it was the lawnmower." 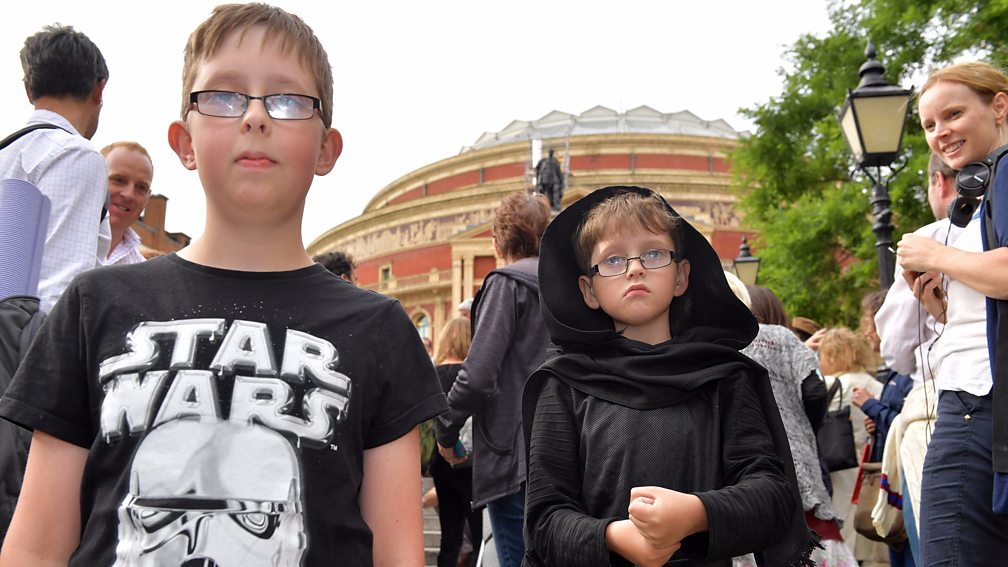 Ethan: "I've come as I love Star Wars. The action. The characters. And the music's awesome. It makes me imagine I'm in a Star Wars battlefield. I'd be a Jedi, with the villains chasing me. I've been to a few classical concerts. They were fun. When I'm in bed I listen to classical music. I haven't told my friends about it, but it makes me sleep better. My brother's dressed up, but there were no clothes that fit me at home."

Adam: "I want to have a lightsaber." 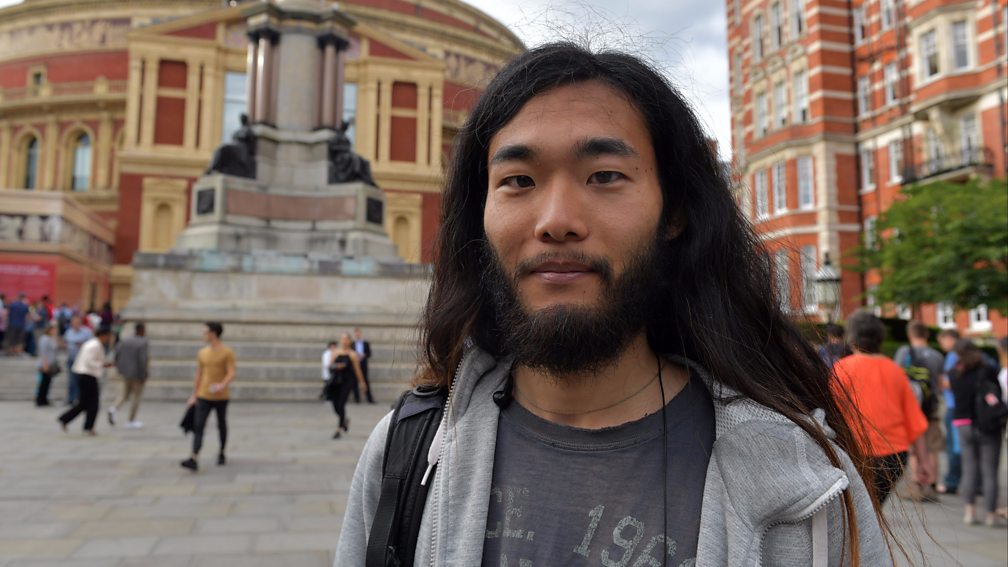 "I've come as John Williams has been my hero since I started playing music. I started when I was five, in Chiba, Japan. My mum plays piano and she taught me how to play, and then I went to the cinema with my dad, Star Wars Episode One, and it was amazing. I was just so impressed by the music. More than the film? Yeah! That’s the beauty of John Williams: you hear his music and it puts pictures into your head. You don’t need the film. In the cinema, I always stay right until the end of the credits, after everyone's left, just so I can hear his music." 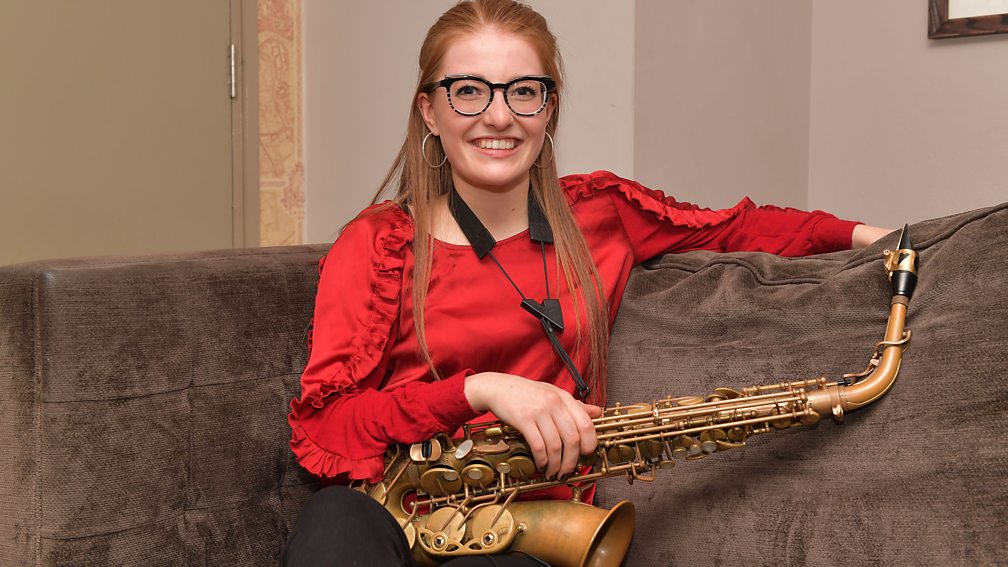 "I used to play John Williams's music all the time growing up. His music’s just so accessible, and it really moves people, it’s so emotionally involved. I actually used to busk with the Harry Potter theme. My mum and dad had a tea room in Ulverston so I’d busk outside the shop. I used to make loads of money!

"I'm playing from Catch Me If You Can tonight. It’s really good. I only saw the film for the first time while getting ready to play tonight. I’ve never really watched that many films as I’ve always been practising. It’s kind of sad!"

Luca Horton (12) and his mum Averil 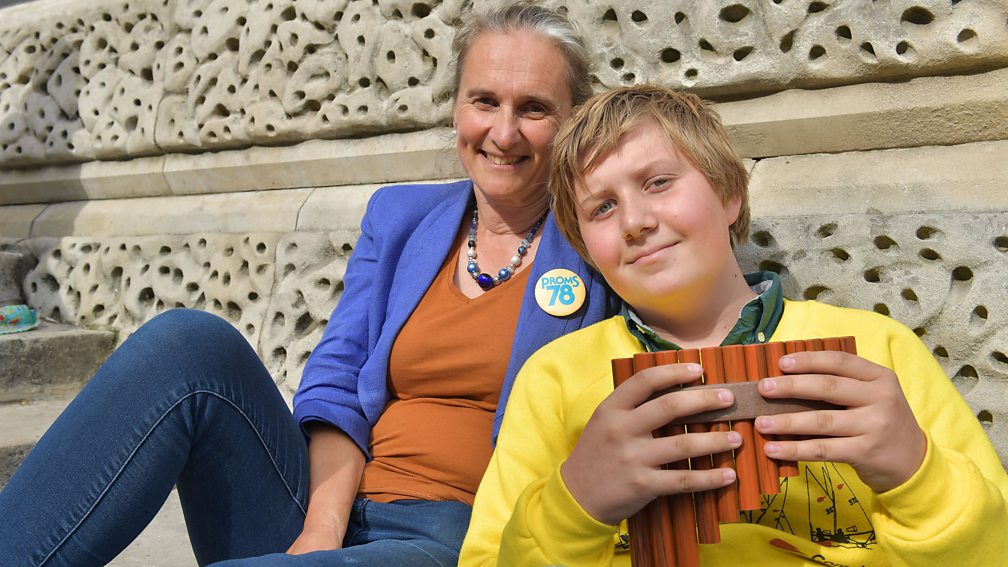 Luca: "My brother let me borrow his panpipes as he knew I’d have nothing to do here in the queue. We come every year - we’re promenaders. When I hear the music, it makes me feel special because it’s very different to what things people my age normally listen to, like rock and pop.

Averil: "I like that it's John Williams tonight. The Proms always has an incredibly broad range of music. I remember years ago there was a lot of Indian music. To have some of the lighter, less heavy stuff is good, because it's a way to get people in. And it's a nice change from Shostakovich." 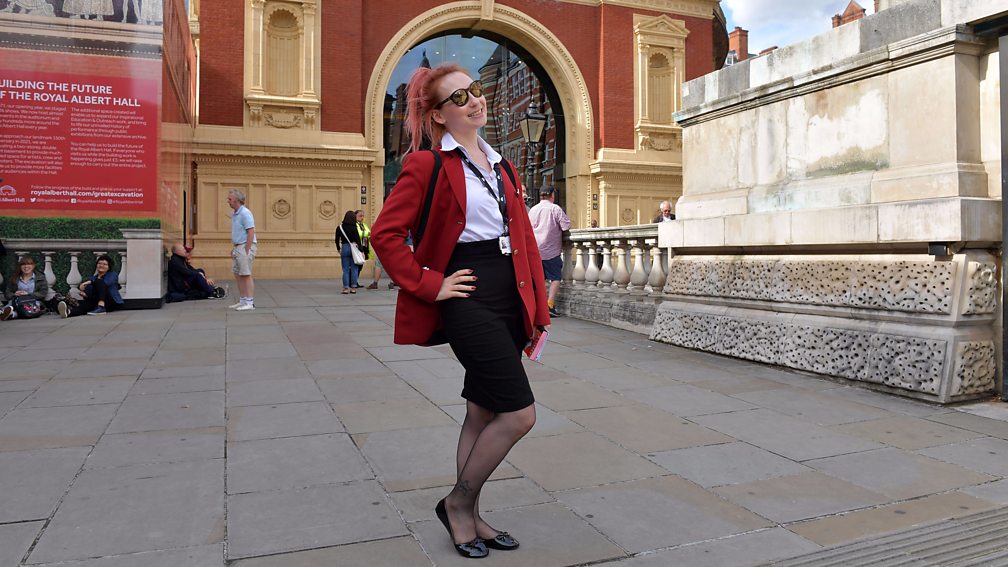 "I would've happily dressed up as Princess Leia today. I'm a massive Star Wars nerd. I had this plan to come in to the Star Wars Theme for my wedding, but my sister's stolen the idea. That tune's got so much emotion behind it, for sure. When you're a little kid and you hear it for the first time, it's properly awe-inspiring.

"We get put on different positions around the hall when we're working. I may not hear any of it, but if I do, I'll definitely cry. When the trailer came out for the last Star Wars film and Harrison Ford came on, I actually cried. I've had a crush on him since I was 14. I know he's in his 70s now, but…!" 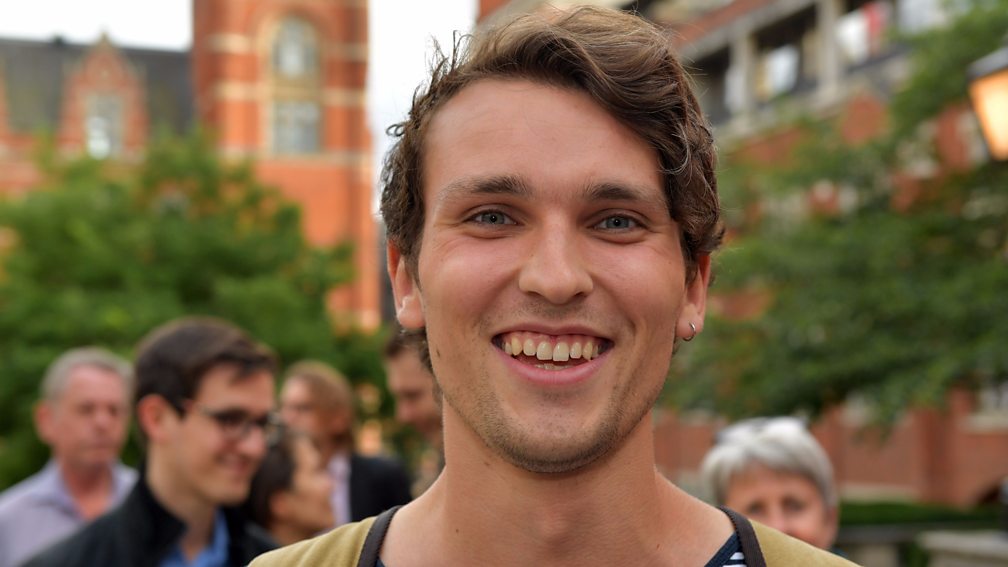 “I love John Williams. I think his orchestrations are quite unique, compared to a lot of other film composers. And also I’m a massive fan of Star Wars, which always helps. When was the first time I saw it? Probably when I was five or six. And then my parents bought me the music on CD, and I had that on repeat on the hi-fi. I really annoyed them with it. I play violin and so in my lessons I even made my teacher buy the Star Wars music, but there was no solo violin music, so he had to get the trumpet music because I loved it so much. I still have all my lightsabers. I have three. I would have brought one, but they’re in Nottingham at my parents’, unfortunately." 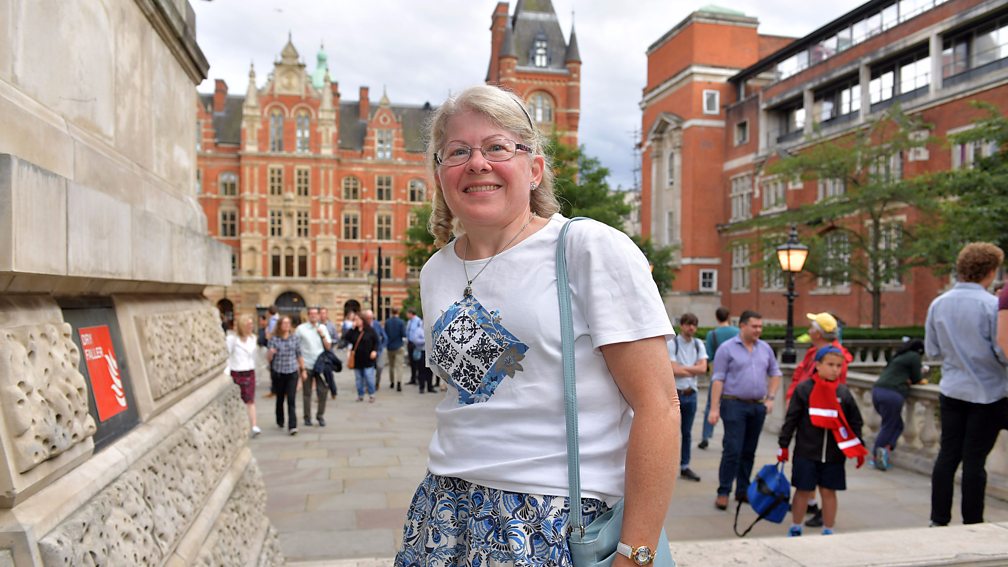 “Who doesn’t love John Williams? I can’t tell you what my favourite piece of his is. It’s like if someone asks what’s your favourite film. It depends if you’re in a happy mood, a sad mood, you’ve just lost a thousand pounds or you’ve won the lottery. That’s his genius - he can just pull something out of the bag for any moment. How can you link Indiana Jones to JFK, to Schindler’s List to The Witches of Eastwick? The only thing that can is John Williams.

“He should be up there with Verdi and Rossini, because if you think about those opera composers, they weren’t writing for the highbrow elite, they were writing for the people of the time. It was made for everybody and that’s what John Williams does now.”