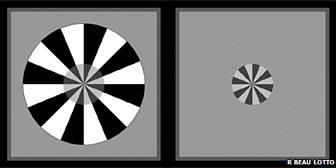 There was a point, soon after MTV launched in the 1980s, when the music video became far more than just a visual promo for a song; a good video became a piece of art in itself and the world of music-video directing a fertile breeding ground for filmmakers who would go on to make features and crack Hollywood.

One way of making a vid stand out was to use optical illusions and perspective tricks, some of which have been baffling our eyes and melting minds for centuries. And there's no doubt that in the age of YouTube, an expertly crafted film helps a song go viral. Here are eight of our favourites from the 80s to the present day...

For this extraordinary video, which you'll need to watch a few times to get your head around, director Oscar Hudson uses a hikikomori - a Japanese adolescent who has chosen to withdraw from life - and a series of increasingly smaller rooms to create a sense of intense claustrophobia and isolation, fitting of the Bonobo track it was made for. There's no CGI involved; only, as Hudson told Creators, "in-camera physical effects". He added: "We had to design an entirely new way of moving our miniature camera to get it to fit through the tiny doorways and travel smoothly for such a long distance. We also had 18 rooms all at different scales, so we had to duplicate and shrink every single prop that features in the set, which obviously was a ton of work."

[WATCH] Bonobo in session for Lauren Laverne (available until 26 March)

OK Go - The Writing's On the Wall - Official Video

US indie band OK Go won a Grammy for what became known as 'The Treadmill Video' (the one-shot promo for 2006 single Here It Goes Again), then took things to a whole new level with the four-minute film for 2014's The Writing's on the Wall, which was co-directed by lead singer Damian Kulash. It's a veritable smorgasbord of very analogue optical illusions, also shot in a single take, and partly inspired by Swiss artist Felice Varini. OK Go planned it for two months, required a team of around 50 people to make it possible and attempted 60-odd takes (18 of which were full runs) in about nine hours before settling on a take from the middle of the shoot. Their hard work paid off - within a week of the video going live, it had clocked up seven million views. 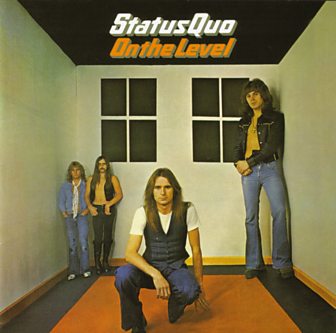 Status Quo's On the Level cover

OK Go's film for The Writing's on the Wall unquestionably owes something to the 1987 video for Squeeze's Hourglass, directed by Ade Edmondson, famous at the time for playing psychopathic punk medical student Vyvyan in the BBC sitcom The Young Ones. Again, there are multiple perspective tricks going on here, including the Ames room, which Status Quo also used on the cover of their 1975 album On the Level. On MTV, the video became a sensation and helped Hourglass become Squeeze's biggest hit in the US, where it reached No.15 (it also went Top 20 here).

Status Quo's On the Level cover

The video for Palomides by Scottish indie rock band Washington Irving, created by Glasgow-based filmmaker James Houston, uses a different kind of optical illusion - the autostereogram, which you might remember from the Magic Eye books that sold like hot cakes in the 1990s. As the band suggest at the beginning of the video, what you need to do to get the effect - essentially the imagery will suddenly burst into gorgeous 3D - is focus your eyes "beyond" the screen. When you manage that, and it may take a second, you'll be able to hold the effect in place for the rest of the video.

Another trippy autostereogram music video is the one for Young Rival's Black is Good from 2014 [contains adult language].

If you remember the Magic Eye books, you're also certain to remember the mind-boggling and iconic 1996 video for Jamiroquai's Virtual Insanity, directed by Jonathan Glazer, who, four years later, won acclaim for the crime film Sexy Beast, starring Ray Winstone and Ben Kingsley. The big question you need to contemplate while watching this vid, which looks like could be a clever one-shot piece but is actually a composite, is: what's moving? The floor or the walls? And which bits of furniture? It's a fun film to unpick, as indeed all of these are, and still looks wonderful 21 years later.

No list of clever videos that use visual effects would be complete without at least one by French director Michel Gondry, who's work with Kylie Minogue (Come Into My World), The Chemical Brothers (Let Forever Be), Radiohead (Knives Out) and countless others is just as impressive as this promo for The White Stripes' 2005 single The Denial Twist (his fourth video for the Detroit duo). Working with the theme of the song itself - that things aren't always what they seem - Gondry uses an Ames room, forced perspective and distortion to create a surreal world featuring US talk show host Conan O'Brien in which, well, things aren't quite what they seem.

Darwin Deez - The Mess She Made

Forced perspective is a technique that makes objects appear farther away, closer, larger or smaller than they actually are, and it's employed by just about anyone with an Instagram account who's been to Pisa (and got their friend to take a picture of them, in the foreground, holding up the Leaning Tower, in the background). For his video for Darwin Deez's The Mess She Made, Oscar Hudson (who also directed the above Bonobo video) uses the technique to extraordinary effect, creating a series of, ahem, money shots in which Mr Deez magically becomes historical figures on bank notes.

Finally, if you're reading this article on a desktop or laptop, you'll need to switch to your smartphone to get the full effect of this brilliant video made for Japanese idol group Lyrical School. It's a "vertical movie" - shot in dimensions that create the slightly queasy feeling that the J-Poppers have hacked your phone. It's not strictly an optical illusion, but loads of fun and a very clever idea that plays directly into the hands, literally, of the teen market that consumes the majority of their media on mobiles.