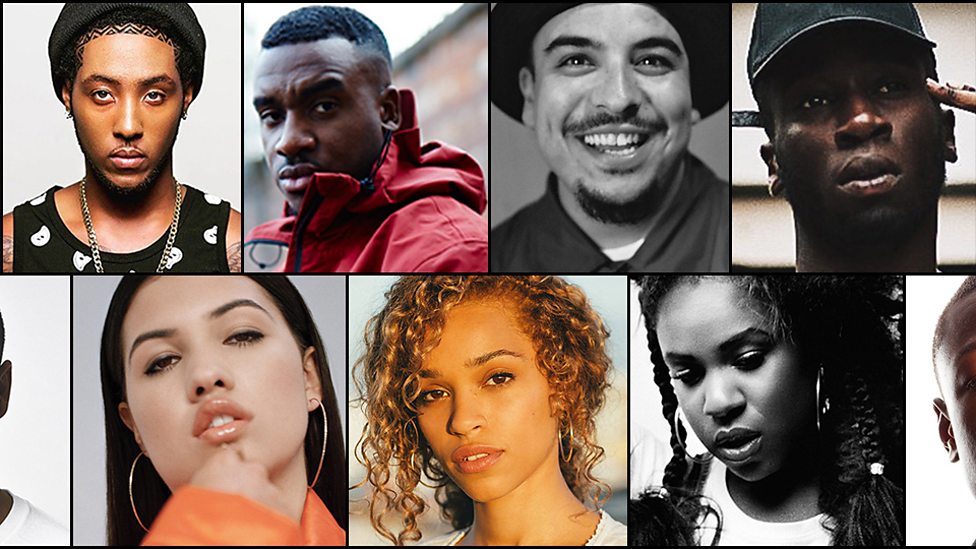 BBC Radio 1Xtra's Hot 4 2016 shortlist contains the finest new rappers and MCs, vocalists and bands across grime, soul, hip hop, RnB and reggae. But before they were tipped for big things this year, the artists were already blowing away listeners in 2015 with live performances, either in the Live Lounge, at festivals or from the depths of Charlie Sloth's fiery booth.

Here's a selection to show what makes this year's crop of contenders so hot:

Already well established as one of the hottest grime stars coming through (and one of very few Mancunian MCs to reach national prominence), Bugzy's contribution to 1Xtra's MC Month was this inspired retread of 2Pac's Changes, in which he updates Tupac Shakur's sober and reflective lyric for the social media age. It's a world away from his pugnacious contribution to 2015's great grime beef, and all the better for it.

In a festival environment it can be tough for new acts to really stand out, even with killer songs like Firefly and Zillionaire ready to go. But NAO has the benefit of a unique voice - a vulnerable wail that stopped Glastonbury goers at the BBC Introducing stage in their muddy tracks - and songs that warp and bend, finding their own space outside of recent developments in dance music (she's already collaborated with Disclosure), pop and RnB.

J Hus: "I had to show them my dark side"

Fire In The Booth – J Hus

2015 was a very good year for J Hus. Dem Boy Paigon is on the way to four million YouTube hits, his mixtape The 15th Day is gathering praise, and it ended with a nomination in the BBC's Sound of 2016 poll. When called upon for his Fire in the Booth debut back in June, J quickly dealt out three verses, increasing the tension with each go until he peaked with a bleak mission statement casting him as too rough, too gnarly to fit in with the expectations of friends and family.

WSTRN perform an awesome acoustic version of 'In2'

In2 was undoubtedly one of the key songs of the tail end of 2015, a much-needed ray of sunshine in a very wet autumn. And it's the kind of song that suits a variety of interpretations, not least a stripped back dressing room run-through like this, a world away from WSTRN's polished performance of the song on the New Year's Day Top of the Pops.

Oh, and speaking of a variety of interpretations...

Kiko Bun is into In2, too

Kiko Bun covers WSTRN's IN2 in the 1Xtra Live Lounge

Who knew that what In2 needed for an extra burst of unseasonal sunshine was a reggae makeover? Kiko Bun did, that's who. This performance from October showcases his remarkable reggae voice (all the more noteworthy when you consider he's half-Panamanian, half-Italian and from South London) and his band's uncanny ability to recreate the classic 1970s sounds of Jamaica's Studio One.

Kojey Radical: "I can paint a picture so vivid"

This is not like other freestyles. While other rappers put themselves before Toddla T's microphone with lyrics so meticulous it can feel like they were prepared months in advance, Kojey Radical started his first freestyle ever with a half muttered "I would never normally do this, but I like Toddla". He then delivers a stunning bleak travelogue, half rhymed, half stream-of-consciousness - letting lyrics die in his mouth and then repeating them - and signs off with an apologetic shrug and a slap on his own back. That's class.

Yungen goes on the pull

Yungen 'Put It On Me' for 1Xtra MC Month

Also from 1Xtra's MC Month, this was Yungen's second appearance in the Live Lounge last year: a bass-heavy version of Ja Rule's Put It On Me with personal lyrics that highlight his unorthodox approach to romantic matters. Key lyrics include "it's gonna take a lot for me to trust you", "if your friends are bad then all of them can come too" and "you look better when you ain't in your going out clothes", and yet it's all rather sweet by the end.

Other artists come into the Live Lounge and do one cover of one song, but Izzy Bizu is different. In August she arrived with a mash-up of Sam Smith's Omen, J Dilla's It's Like That and Portishead's Glory Box that took her from on an emotional journey from cocksure and strutting funk to insecure pining soul to screamingly paranoid trip hop and back again in a remarkably seamless fashion.

Most of Charlie Sloth's Fire in the Booth performances are about the relationship between one man and a microphone. Back in February, Croydon grime collective Section Boyz - best newcomers at the Mobo Awards - came mob-handed, delivering quarter of an hour's worth of breathless rhymes into a forest of mics, with a namecheck to So Solid Crew's 21 Seconds for good measure.

It's curious to think that an aspiring singer could reach the giddy heights of the BBC's Sound of 2016 shortlist without having ever performed live, but it's downright startling when you realise that Mabel is of musical stock (her mum is Neneh Cherry, and her dad is producer Cameron McVey). But that's part of her charisma, she kept her songs and musical ambition to herself until she was ready. This performance is that moment.