Fantasy XI: Songs about footballers for each position on the field

We've all heard of well-known footballers making suspect records, but what about when musicians write songs about the legends of the beautiful game? Where their infatuation with a player is so intense that they're driven to write lyrics and music to try to capture the poetry in motion they've witnessed kicking a ball about.

There are more songs about footballers out there than you probably realise, so here is a special Fantasy XI of songs about the stars of game, from the goalkeeper through to the strikers. Admittedly, it's a slightly wobbly formation, with only one winger, but these are world-class players - this team could do a lot of damage. 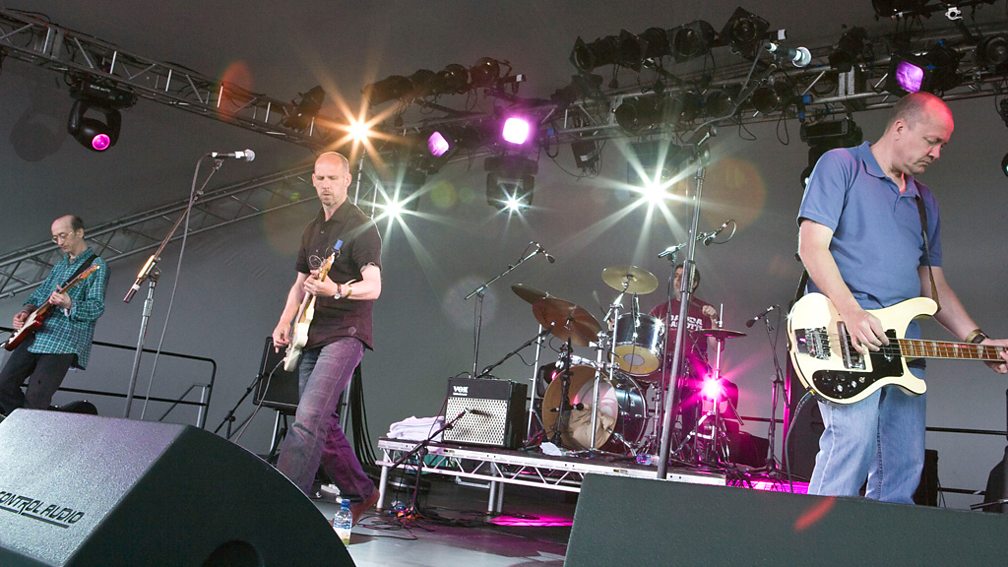 Unsurprisingly, there are fewer songs about goalkeepers than any other position on the field, because nobody grows up wanting to be a goalie, do they? There's Kasey Keller by the indie band Barcelona, which is the only time you're ever likely to see former Leicester and Tottenham shot-stopper Kasey Keller and Barcelona in the same sentence… and then there's Bob Wilson - Anchorman.

Wilson played for Arsenal and Scotland, and he also played a season for Melchester in the comic Roy of The Rovers. After retiring as a player, he became a well-known football broadcaster on British TV, an appointment that rather perplexed the mighty Half Man Half Biscuit, wry indie rockers from Birkenhead. "Well, I'd like to meet Stephenson the engineer," sings Nigel Blackwell, "And I'd like to meet Faraday and buy him a beer / And I'd love to meet the bloke who had the bright idea of Bob Wilson - anchorman." The band have written a number of sardonic songs about the footie. Blackwell was an editor of a fanzine when the band first formed in 1984. 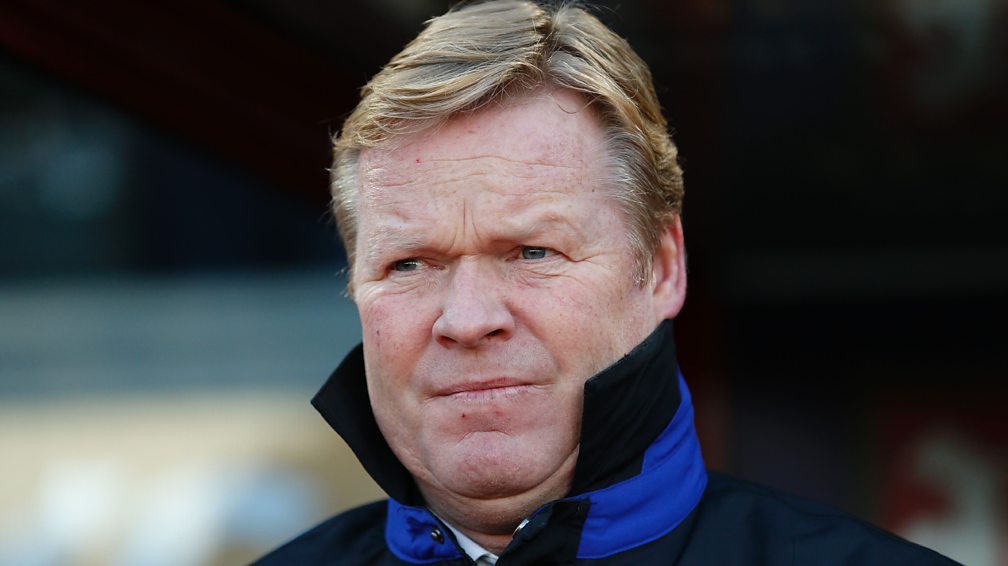 Details of Dutch schlager revivalist Fred van der Vaart are in short supply on the internet. Three of his cheery drinking songs can be found on streaming services, but a biography is nowhere to be seen. However, we know lots about the Koe Koe Koeman of the song in question.

Ronald Koeman was a manager in the Premier League until recently, firstly with Southampton and then with Everton. In a previous life, he was one of the greatest attacking defenders the game has ever seen, and he caused great offence on winning the European Championship in 1988 when he pretended to dry an area the sun don't shine with a German opponent's shirt. He also put paid to England's USA World Cup ambitions in 1993 when he flicked one over the wall with some aplomb despite an earlier agricultural tackle on David Platt that should have seen him off the field. Or in layman's language, he scored a really nifty goal.

International pop superstar Shakira is a big football fan who has recorded not one but two official World Cup songs, including 2010's Waka Waka (This Time for Africa) for the tournament in South Africa. She's also a big fan of FC Barcelona defender and tiki-taka legend Gerard Piqué. During the racy pop number Me Enamoré, the Colombian singer declares in Spanish: "I would like to have 10 children with you, but let's start with a couple." This might seem a little forward, until you learn that the Catalan footballer is in fact her husband! 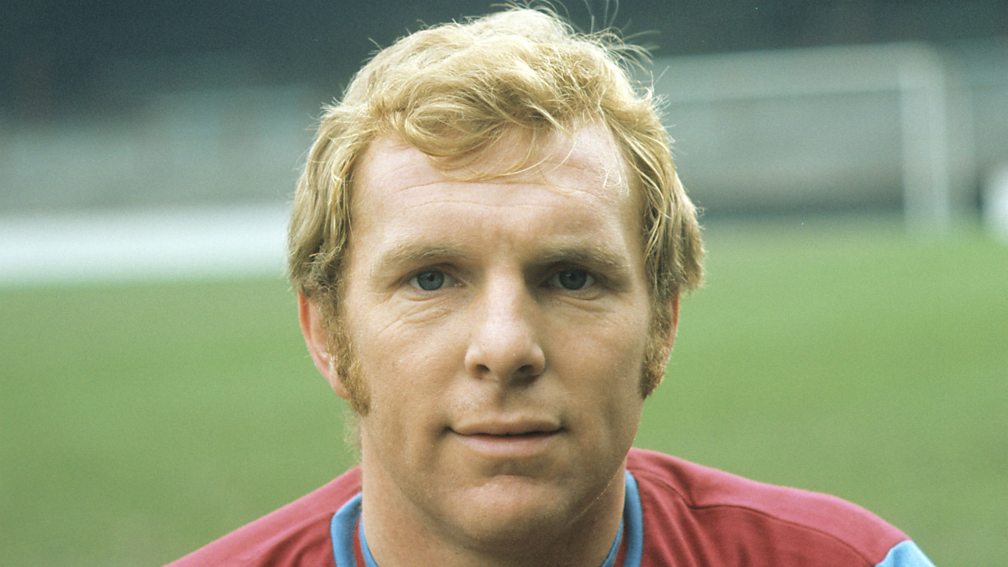 East Anglian punk misfits Serious Drinking present a short-but-sweet defense for an accused defender. Bobby Moore Was Innocent is a retrospective account of the West Ham and England deity's brush with the law in Colombia in 1970. The infamous Bogotá Bracelet incident made headlines around the world when it was presumed Moore had stolen a trinket from a jewellery shop. He was detained for four days and even then-Prime Minister Harold Wilson tried to intervene in the hope England could defend their title in Mexico with their captain present.

Eventually Colombian police decided the footballer was probably innocent, though Serious Drinking put that beyond doubt when they recorded this song for a Peel Session in 1982. 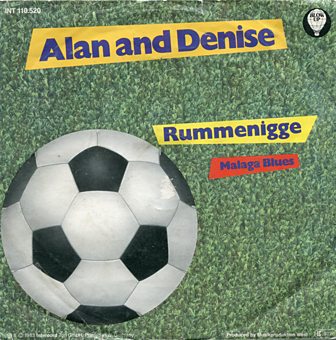 Definitely the strangest story in this list concerns a song by a British couple Alan & Denise, whose single Rummenigge - inspired by the German footballer Karl-Heinz - got to No.43 in the German charts in 1983. They wrote the song after watching a friendly at Wembley between England and Germany in 1982 that saw the visitors triumph 2-1 thanks to a wonder goal from Karl-Heinz.

The song is mainly memorable thanks to a lyric about the Bayern Munich winger's "sexy knees". German national news network N-TV contacted Alan & Denise a couple of years ago in celebration of the player's 60th birthday. When asked who came up with the lyric about the sexy knees Alan said, "That was me. I'm a little bit crazy, you know."

The pair even met Rummenigge in a hotel in Dusseldorf at the time they were storming the German charts. "He was so friendly to us," said Denise. "It's true, the first time he heard the song he wasn't sure if we were taking the rise, but after hearing it a few times he liked it. We said, 'Yeah, the song is funny, but we also appreciate you as a footballer; it's a very sweet pop song.' Then we had a right laugh." 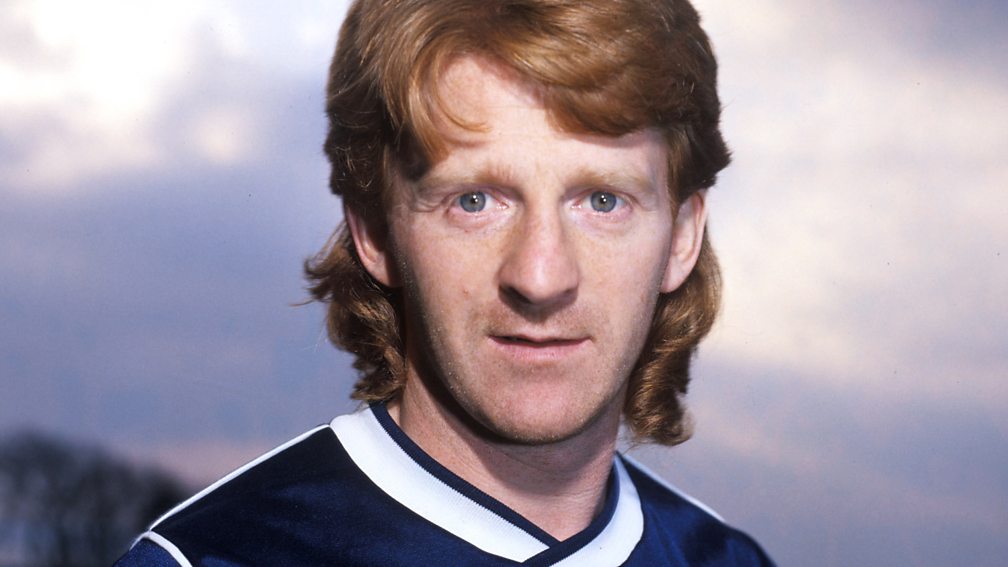 In the UK, 90s Limerick-based indie rockers The Hitchers are best known for their song Strachan, which recounts a fight between the protagonist and his wife as he tries to watch a game of football. "It's a programme about art," is his riposte when his partner asks what he's watching, "And the greatest midfield artist of them all walked out onto the park."

The tribute to 'Wee' Gordon Strachan was popular among DJs like John Peel, Steve Lamacq and Sean Hughes. Songwriter and drummer Niall Quinn (not that Niall Quinn) was also singing and playing guitar in another band at the time called The Cranberry Saw Us, but decided to scale back his activities with them and concentrate on the one band. The singer who replaced him was Dolores O'Riordan, and The Cranberry Saw Us soon changed its name to The Cranberries.

Other than Diego Maradona, few modern footballers have inspired as much art (of varying quality) as Zinedine Zidane. The player was the subject of a 2014 song by the Australian band Vaudeville Smash featuring the voice of commentator Les Murray, and in 2006 Mogwai recorded a whole instrumental soundtrack to accompany an arty movie called Zidane: A 21st-Century Portrait.

And then there's this slightly overwrought football power ballad by the Bergeracian chansonnier Pascal Obispo, who has maintained a healthy following in his native France since his first album arrived in 1990. Zinedine is a song which compares Zizou's legend and talent with the vacuity of modern celebrity and even name checks Andy Warhol in reference to his much-quoted "world-famous for 15 minutes" aphorism. "Tout espoir n'est pas mort," or, "All hope is not dead," he sings on a song that reached No.8 in the French charts in 2003. Like Marco Materazzi, Obispo didn't see the headbutt coming either. 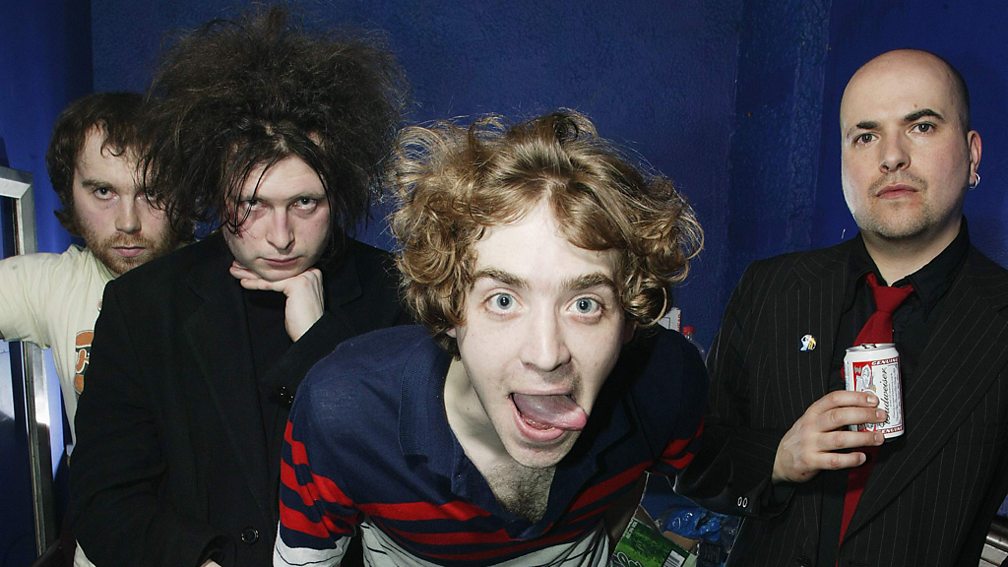 There's a famous story about George Best that ends with the punchline, "Mr Best, where did it all go wrong?" And similarly, 70's football playboy and maverick Stan Bowles was followed around with the line, "If Stan could pass a betting shop like he passes a ball he'd be a rich man."

The QPR midfield player/striker (and later Brentford midfielder for the purposes of keeping the shape of our team) could conjure something out of nothing, and the band who recorded a song about him in 2005 were known for emerging from nowhere as proponents of the guerilla gig. The Others recorded the song not only in honour of Bowles, but for QPR fan Pete Doherty, who was a friend of the singer Dominic Masters.

"You could say Peter Doherty is the Stan Bowles of the music world and Stan Bowles is the Peter Doherty of the football world," said Masters, who actually supports Manchester City. "I suppose he is a bit like me," admitted Bowles when interviewed by the BBC in 2005. "It's fantastic to have a pop single named after you - I heard it earlier this week and I thought it was very good. I hope it does the business for them."

Sultans Of Ping F.C. - Give Him a Ball (And A Yard Of Grass) (Nigel Clough - midfield/striker) 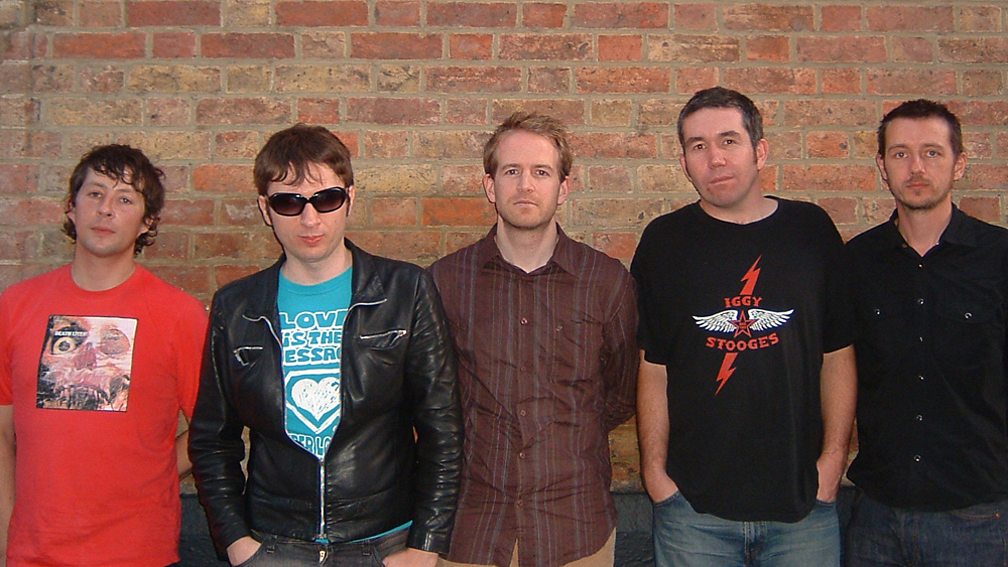 Another Irish band - this time from Cork - wrote a song in tribute to Nigel Clough, son of legendary Nottingham Forest and Derby County manager Brian Clough. In fact, the titular quote comes from something Clough Snr once said about the apparently unpulchritudinous Scottish winger John Robertson. "If I felt a bit off colour I would sit next to him... I was bloody Errol Flynn in comparison. But give him a ball and a yard of grass, and he was an artist - the Picasso of our game."

As for Clough Jr, "He's a nice young man, it's a lovely smile," according to the song. Nigel had a lot to live up to with a dad like that, but - like Sultans of Ping F.C. - he had his moments.

Edson Arantes do Nascimento - or Pelé to you - was the subject of a biopic released in 2016 in the US, notable only for the shocking reviews and the fact Pelé’s father was played by Brazilian musician Seu Jorge (Colm Meaney also pops up as the Swedish national coach from the 1958 World Cup). Academy Award winner AR Rahman of Slumdog Millionaire fame was drafted in to provide a momentous cinematic soundtrack to accompany the greatest player the world has ever seen. Like Brazil at their home tournament in 2014, it's a bit of an anticlimax.

From a footballing deity to a footballer whose career was ended by divine intervention. Attacking Wolverhampton Wanderers forward Peter Knowles, who'd helped fire Wolves back up to the old First Division in 1967, was on the cusp of Alf Ramsey's England squad and under consideration for Mexico 70. That is until the 24-year-old answered the door to a couple of gentlemen while on a pre-season trip in Kansas.

"God's footballer hears the voices of angels," sings Billy Bragg under a flurry of stringed vibrato, "above the choir at Molineux."

Knowles departure from his footballing career to pursue religious convictions as a Jehovah's Witness shocked Britain at the time. One can only imagine the reaction if a footballer of similar status followed a righteous path with all the riches the game has to offer now.