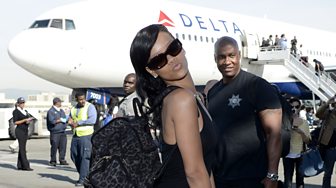 Music and attention-grabbing stunts have always gone hand-in-hand, whether it's the Sex Pistols crashing the Queen's silver Jubilee with their boat trip on the Thames or Madonna and Britney Spears locking lips at the MTV Video Music Awards. However, some creative promotional stunts never get off the ground. Here are six of the oddest…

Michael Jackson was rather fond of monstrously huge models of himself. In 1994, several 30-feet statues of the singer were built to promote his HIStory… album. One of them was constructed out of plaster and wood, stood on top of Tower Records in Los Angeles; several others were built using steel and fibreglass and appeared in prominent European landmarks, from the Thames to the Champs-Elysees. In 2009, MTV reported that Jackson had even grander ambitions when preparing for a run of ill-fated shows in Las Vegas (the gigs were scrapped in favour of a residency at London's O2 Arena, but Jackson died three weeks before the start of the run). Jackson had wanted to build a giant, 50-foot robot that would roam the Nevada desert and be visible from Vegas's McCarran Airport, but they couldn't raise enough cash for the project. And a second, less grand but still outlandish scheme also had to be abandoned, again because of a lack of funds: a hotel and casino inspired by the singer, where punters would be greeted by a Jackson-like android. Artist Timothy Patterson, who worked on the plans, said of the concept: "The face would move, shooting laser-beam-looking lights. The whole building would be covered with spotlights." 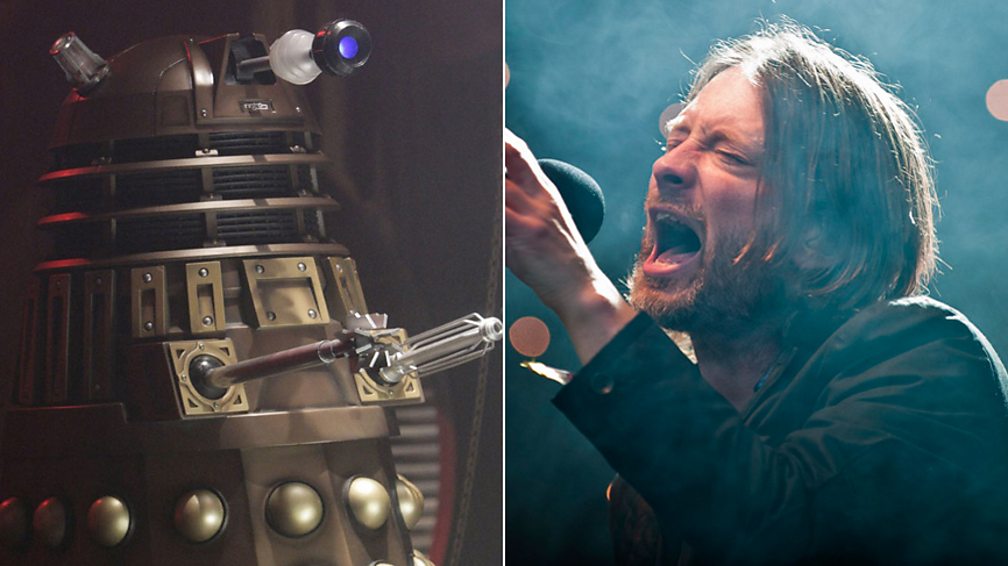 Many a musician has a soft spot when it comes to Doctor Who-related geekery: New Order (and former Joy Division) drummer Stephen Morris, for example, is the proud owner of some life-sized Cyberman and Dalek replicas. According to the artist Stanley Donwood, though, Radiohead's Doctor Who-inspired ambitions went further than mere models. Speaking to Creative Review earlier this year, Donwood - who met Radiohead singer Thom Yorke when they were students at Exeter University, and has worked with the band on their artwork and promotional material since 1994 - revealed that he had wanted to create the cover art for their A Moon Shaped Pool album with the help of the Doctor's most infamous enemies. "It's normally about two years to make a Radiohead record," he explained. "The first things we were talking about were trying to get away from narrative and figurative art, to try and do something that was more to do with chance and happenstance. I had this idea of a painting Dalek that instead of exterminating people would squirt paint… But unfortunately our technical skills weren’t up to the job of constructing a Dalek."

Morrissey and Robbie Williams at the Brit Awards

It's rare for any article about the legacy of MTV's Video Music Awards to ignore Britney Spears and Madonna's iconic 2003 performance, which culminated with the pair sharing a kiss (spare a thought for Christina Aguilera, who sang Like a Virgin with Britney, and kissed Madonna, too, but got comparably scant publicity). As NME reported, in his official biography Reveal, published last month, Robbie Williams claims that he got a similar offer from Morrissey, who wanted to duet with him at the Brit Awards on two conditions: "We sing one of his songs, which was great, it’s a song called I Like You. And at the end he wanted to kiss like Britney and Madonna. I was bang up for that. Kissing Morrissey! That would have been great. Because he's just got, like, a fiercely brilliant face. You know, watching the idolatry that surrounds him, thousands and thousands of straight men I think would sleep with Morrissey. And I might not sleep with Morrissey but I'd have a cuddle and a kiss."

Talking about why the planned performance never took place, meanwhile, the singer says: "I think he was probably maybe a bit bluffing. Maybe. But I wasn't. I'd have wrestled him to the floor. And dominated him… I think it might have been something that he considered that day, then quickly rescinded. Like he does."

Morrissey has never commented on Robbie's claims, although an assessment of the former Take That singer that he gave to the now-defunct music magazine Word was typically wry: "Personally I think that almost everything about Robbie Williams is fantastic… apart from the voice and the songs."

Sticking with the Brits, most people associate the 1992 show with pop provocateurs The KLF, who opened the ceremony by performing a metal version of their single 3am Eternal with some help from the grindcore group Extreme Noise Terror. But that pales in comparison to what they wanted to do, with Drummond telling the Observer in 2000 that he had planned to chop off his hand. "I thought that would be the ultimate thing, a way of taking it even further. I was inspired by the story of the red hand of Ulster, which you see on the Ulster flag. That comes from the story that, when the first people came to the region, there was a young man in the boat who wanted to be the first to claim it for his king or laird, so he chopped off his hand and threw it onto the beach. So in my head, I was chopping off my own hand and throwing it to the massed ranks of the music business, claiming it for myself."

That wasn't his only thwarted scheme, either; he'd also planned to hurl buckets of sheep's blood at the audience but was stopped by a combination of the BBC's lawyers and Extreme Noise Terror who, as vegans, objected to Drummond’s proposed prank.

Health and safety regulations scuppered Lady Gaga's plans for SXSW festival in 2014, when she hoped to perform on a stage mocked up to resemble a giant vending machine. But shortly before the Texas festival took place, Don Pitts of Austin's Music And Entertainment division declared that Gaga's starpower could have resulted in the stage, which is situated in a car park, being too crowded. "Our conclusion was based primarily on public safety concerns," he said, as NME reported. "We look at the size and capacity of the location covered by the permit being sought and how it fits with the anticipated attendance, based on event capacity and promotion. At the end of the day, it’s a parking lot."

An undeterred Gaga was able to find an alternative venue - and some suitably surreal replacement ideas, too: her show at Stubb's featured her being brought onto the stage on a spit (like a roasting pig), while her "vomit artist" Millie Brown regurgitated green liquid over the singer during her rendition of Swine.

U2, Jeff Koons and some kittens in socks 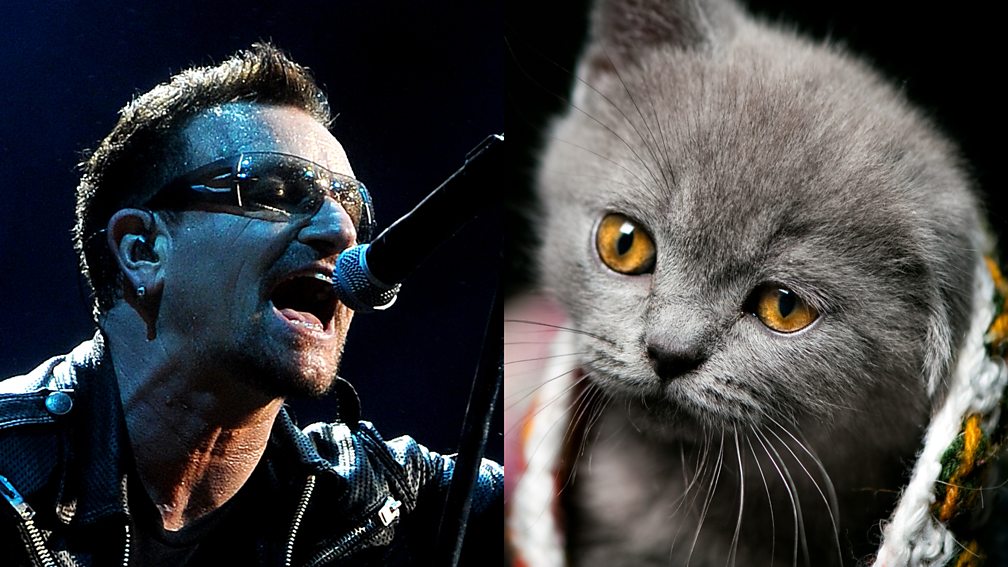 U2 are no strangers to attention-grabbing stunts, even if not all of them pay off: they faced a backlash in 2014 when their album Songs of Innocence was forced onto 500m users of Apple's iTunes as an automatic download, with Iggy Pop among those who voiced their disapproval. But it was U2 themselves who got decidedly sniffy after asking American artist Jeff Koons to design the stage set for a stadium tour. As the Guardian reported, bagging one of the most celebrated artists of his generation was something of a coup, but the band were unimpressed with Koons's work. They went to New York to take a look at what he'd dreamt up, only for Koons to pull back a curtain and show them "a huge photograph of four kittens, in socks, hanging on a washing line". Sadly, U2 didn't take him up on the offer, although perhaps Koons's artwork Cat on a Clothesline gives some idea as to what it may have looked like…